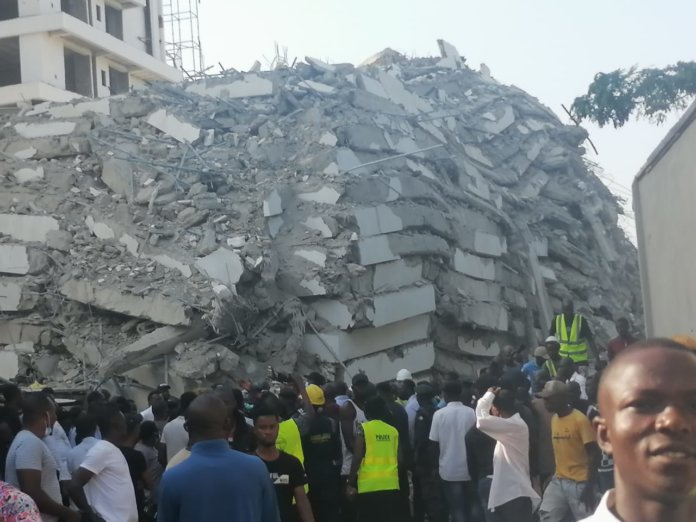 The Lagos State Governor, Mr. Babajide Sanwo-Olu, has ordered an immediate investigation into yesterday’s collapse of a 21-storey building situated on Gerrard Road, Ikoyi, which was still under construction.

But the Lagos State government was quick to add that apart from using inferior materials and flouting basic building regulations, the billionaire businessman owner, Femi Osibona, had allegedly carried on with the construction without subjecting it to procedural approvals.

Also, yesterday, President Muhammadu Buhari sent a condolence message to families of the victims of the unfortunate incident and wanted rescue efforts intensified.

The President, in a statement issued last night by his Media Adviser, Femi Adesina, shared the sad moment with people and government of Lagos State.

He urged authorities concerned to step up efforts in the rescue operations, saying emergency institutions, including hospitals, should provide the necessary support to safeguard lives of the rescued.

The President, therefore, prayed for God’s intervention in the ongoing rescue operations.

Already, the first responders had begun to dig into the night with the hope of finding survivors trapped in the rubbles, just as the property owner, Osibona, was amoung several other people who were in the building at the time of collapse feared dead. Since the build came down yesterday, no one has been able to reach the property magnate fuelling speculations about his condition.

The Lagos State governor, while calling for calm over the incident, said the report of the investigations would be made public in due course.

The governor gave these assurances in a statement signed by the Commissioner for Information and Strategy, Mr. Gbenga Omotoso.

He said the Lagos Rescue Unit (LRU), Lagos State Fire Service and Lagos State Ambulance Services (LASAMBUS) were already on the site, battling to save the lives of those under the rubbles. Three persons have been rescued, even as the operations to save more lives continue.

The Deputy Governor, Dr. Kadri Obafemi Hamzat, visited the site in the company with other officials, including the Commissioner for Physical Planning and Urban Development, Dr. Idris Salako and Commissioner for Special Duties, Mr. Bamgbose-Martins.

The Deputy Governor directed security agents to cordon off the site to facilitate rescue efforts.

General Manager of the Lagos State Building Control Agency, Gbolahan Oki, was also at the scene, assessing the site for any likely damage to the surrounding structures.

Oki, disclosed that the owner of the building was given approval to construct only 15 floors.

He told the News Agency of Nigeria (NAN) on telephone that the owner of the property was arrested sometime last year over breach of town planning rules.

It was also gathered that the Lagos State government had last year sealed the property and ordered the developer to discontinue with the project, because he embarked on the project without subjecting it to procedural approvals from the state’s agencies and other authorities.

THISDAY, last night, contacted the structural engineering company, Prowess Engineering Limited, which had warned in a letter that had gone viral, after withdrawing their services at the construction site, because of irreconcilable differences they had with the developer regarding the construction method.

Executive Director of Prowess Engineering Limited, Mr. Abimbola Ahmed, confirmed that the letter making the rounds was authentic, saying, “The collapse wouldn’t have happened if they had listened to us. With our pedigree in the industry, we observed the way things were going at that moment, we advised but obviously the advice was falling on deaf ears and that was why we took the decision at that time.”

Pressed further to state what the exact cause of the disagreement was, he said, “The concrete mix but we do not want to say too much for now. This is not the time for speculation but we know the government is doing their investigation and we don’t want to mislead anyone. Obviously, Prowess saw happenings that were not supposed to be on a project site at the time and that informed that withdrawal.”

In a letter to the owner of the building, dated 20th February 2020, informing him of their withdrawal from the project, the structural firm had among other things stated: “We arrived at this decision due to the fact that we no longer share same vision with you as our client based on how the project is being executed.

“We can guarantee the integrity of the first two buildings and also works done up to the fourth floor of the third building supervised by us provided specifications have been met in terms of the required concrete strength.

“This we do not have control over as we do not have the concrete cube test results for each stage of the building till date. Also, kindly note that we are not taking responsibilities for any other construction errors that may have occurred over time on the project.”

However, after rescuing three people from the rubbles of the collapsed 21-storey tower, the first responders worked late last night hoping to find more people alive.

The actual number of people, who were in that tower, one of three under construction at 41BCD Gerald Road, as at the time the incident occurred, was yet to be determined.

Reports also had it that the owner of the property was one of those trapped in the collapsed tower and feared dead.

Yet, the cause of the collapse was not known at press time and still being investigated by Lagos State Government officials.

“Whatever we tell you now will be mere speculation,” an official, who did not want to be identified, told THISDAY last night.

But the Lagos state government claimed that, “With the combined efforts of the Lagos Rescue Unit (LRU), Lagos State Fire Service and LASAMBUS, not less than three victims of the collapsed 22-storey building on Gerald Road, Ikoyi were rescued, while rescue operations continued.

“However, investigations have commenced as to the cause of the collapse, while the General Managers of the Lagos State Building Control Agency and the Lagos State Physical Planning Permit Authority were on ground to make summary assessment on the spot of the extent of damage to the surrounding structures, if any.”

Commenting on the tragedy, the National President of the Nigerian Institute of Building (NIOB), Mr. Kunle Awobodu said, “It is a sad day. We have never had a building of this height collapse. It is obvious some professionals will be involved.”

Awobodu said it was important to investigate what happened to avoid speculation.

“Professionally, it is not good to speak based on speculation, but what I will just say is that the collapse of this high-rise will now put fear and doubt in those who are interested in buying or renting high-rise apartments in Ikoyi,” he added.

Why Ambode May Return to His Unfinished Business in 2023