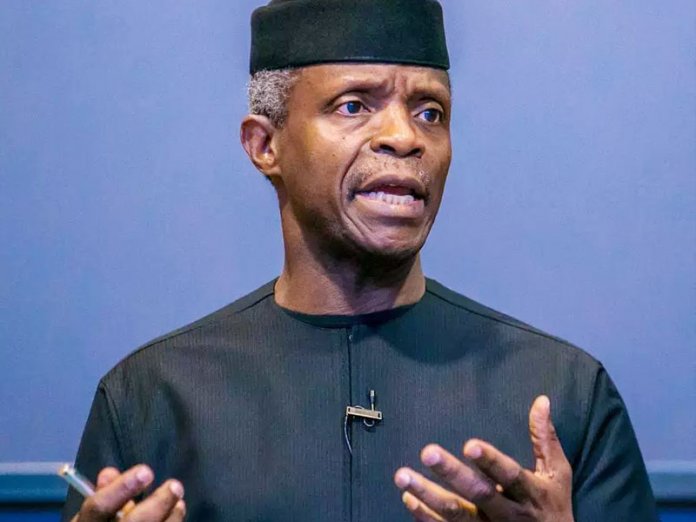 Vice President Yemi Osinbajo, yesterday, said the seizure of funds belonging to local governments in Lagos State by former President Olusegun Obasanjo in 2005 provided ample opportunity for Lagos to think like a sovereign state able to overcome its financial challenges. Osinbajo, a Senior Advocate of Nigeria (SAN), said the capacity of the state to rethink its predicament at the time resulted in huge increase in its Internally Generated Revenue (IGR), which is today in the region of N45 billion.

Osinbajo spoke in Ado Ekiti, the Ekiti State capital, at an Economic and Investment summit the “Fountain Summit 2021,” organised by the Governor Kayode Fayemi administration. The vice president appealed to governors of the federation to start making huge investments in areas they have comparative advantage to shore up their IGR and stop complete reliance on federal allocations for survival. He said the governors could grow investments without resorting to multiple taxation.

They insisted that preventing governors from taking charge of security was affecting investment, development, and wellbeing of the people adversely.

Titled, “Investment attractiveness, and Economic Development: Lesson for the Sub-nationals,” the summit, which was designed to proffer solutions to some socio-economic issues rattling the state, was also attended by the Ondo State Governor, Rotimi Akeredolu, represented by his deputy, Lucky Ayedatiwa.

Osinbajo, who was one of the panellists, stated that time had come for the chief executives of states to start thinking about how to grow their respective economies like a nation, by investing in the most appropriate ways in their areas of economic strength.
He stated, “The attractiveness of investments to any state should be radical, because that is the revenue hub and determinant of how happy the people of any state will be in terms of economic development in relation to their standard of living.

“But while trying to grow investments, we must be cautious of multiple taxation. It weighs down businesses. Ekiti is a business-friendly environment. Ekiti has also excelled in the aspect of ease of doing business. You have vast arable lands for agriculture.

“Also, of recent, the government of Ekiti divested 76 per cent of shares in the Ikun Dairy farm for Promasidor for the production of 80,000 litres of milk daily. Let me say that Ekiti has a bigger economy than many Africa nations. The question we should ask ourselves is that if I were the landlord of this nation, how do we survive?

“During my time as a commissioner in Lagos, we started with N600 million monthly Internally Generated Revenue in 1999. The seizure of Lagos funds by President Olusegun Obasanjo made us to think like a sovereign state. Today, Lagos is making over N45 billion monthly.
“The surest way forward is to deepen investments in the areas where Ekiti has comparative advantage. We should also make good investments in technology to grow the knowledge economy, which is education.

“Let me commend the foresightedness of the governor, Fayemi, to know that technology is the best way to go. I am even happy that the low in charges of the broadband airwave has already started attracting investments to Ekiti. What is in vogue now is that, well-trained people in technology are the game changers.

“I urge Ekiti to leverage on the value in education it has acquired to develop its investments. I believe Ekiti has not lost this value. It has to be fountain of the knowledge economy, not just the fountain of knowledge.

“The Afe Babalola University multisystem hospital in Ado Ekiti is now being mentioned internationally. It has made breakthroughs in neurosurgical, surgical, plastic surgery and many other areas of medicine. Many countries don’t have such facility.”
Speaking on the lingering security crisis that was gradually crippling the economy, Fayemi insisted that a multi-level policing system remained the best way out.

He said, “This request does not mean abrogation of the central police. If you have problem of security in Kaduna, Governor el-Rufai can easily take charge. My recent experience and many of our governors were not even palatable, where we wanted to procure drones and Mr President was with us on the issue, but the NSA refused us End User Certificate, though we got it one year after.

“As of now, security is on the Exclusive List. Even if the federal government is ready to allow us procure some arms, we have to sign MoU with the Nigerian Air Force. We have to work together collaboratively, because investors consider security as number one in any state.”
Fayemi stated that his government had signed a bill into law establishing Ekiti Economic Council to plan and implement the summit and ensure that the outcome outlives his administration.

On how to cut cost in governance, Fayemi said the COVID-19 pandemic had helped in no small measure, saying the dwindling revenues to states has also taught a lesson that governors must block leakages in revenue collection and leverage on areas, where they could get support from the federal government, especially, the social intervention programmes.

The Ekiti State governor said he had completed many of the projects left behind by former Governor Ayodele Fayose, saying abandonment on the basis of lack of interest and change of party constitutes great impediment to growth and development.

Supporting the call for state police, Obaseki said the police should be removed from the exclusive list for states’ chief executives to be in firm control.

He stated, “If you have a businesses, you have to protect them and you must have the apparatuses. Security is on the exclusive list and we are looking up to the federal government to remove for states to take charge.

“We must provide facilities for the police to be able to train our local vigilantes, because in Edo State, that was what we did. We raised a vigilante group to police our villages from kidnappers and other criminals.”

On the role of ICT in driving economy at the subnational level, Obaseki advised that states should use ICT to recast primary education results, by making the children at their tender age to perceive computer as part of their lives.

The Edo State governor commended Fayemi’s transformation agenda in Ekiti State, saying the state is lucky to have a resourceful and innovative chief executive that could turn things around with lean resources.

Doing a holistic appraisal of the projects executed by Fayemi, he said he was stunned by the quantum of projects executed in water and other sectors, despite the COVID-19 challenge and the lean allocation accruing to Ekiti internally and from the federation accounts.

The governor said, “Ekiti is lucky, you don’t know how lucky you are to have the kind of governor God has given you. Ekiti is not a big state. You are not even rich, but you have the greatest resource any nation can have, which is human resource.
“Governor Fayemi is not only leading Ekiti people well, he is leading all the governors well as the chairman of the Nigerian Governors’ forum.

Lending his voice to the issue of state police, the Lagos State Governor Babajide Sanwo-Olu said, “When you have investments, you would have to protect them and take responsibility for whatever happens. The investors will rely on the governors for protection and it is sad that we are not in charge. This is the area, where the federal government must look into the issue of state police.”

Sanwo-Olu suggested how Ekiti could transform its IGR and break the challenge of sole reliance on federal allocation, saying Lagos State now makes between N45 and N48 billion monthly from the paltry N600 million realised in 1999.

The Lagos State governor suggested that the state should digitalise its revenue collection process and give staff in the state Internal Revenue Service incentives to do their jobs without perpetrating corruption.

Sanwo-Olu stated, “You must have robust technology and ensure people don’t collect money with hands. Make sure your money is centrally collected. Also, block all loopholes, encourage your staff by giving them small bonuses, so that they can deliver more. Ekiti has the potential to think like a country.”

El-Rufai described security as a big problem that every Nigerian should be concerned about.
The Kaduna State governor said, “We have 150,000 personnel in the Nigerian army. Police was 400,000 by the time this government came on board, but it has gone down to 300,000 now. We need multi-level police. Policing is local, just like a unitary environment like Britain.

“Kaduna State is about 46,000 square kilometres in size. Boko Haram has been chased from North-east by ISWAP and now occupying the North-west. But if they are dislodged here, where would they go? This is why we should all be concerned.”
He added that the country must decentralise the power of National Judicial Council to determine the number of judges a state could have.

He said, “No country can develop beyond the level of its civil service, you must appoint the right civil servants and we just give way for younger people to take Nigeria to the next level.
“I have just appointed the youngest chief executive of any agency in Nigeria, a 28-year old to be in charge of Kaduna State Investment Promotion Agency.”