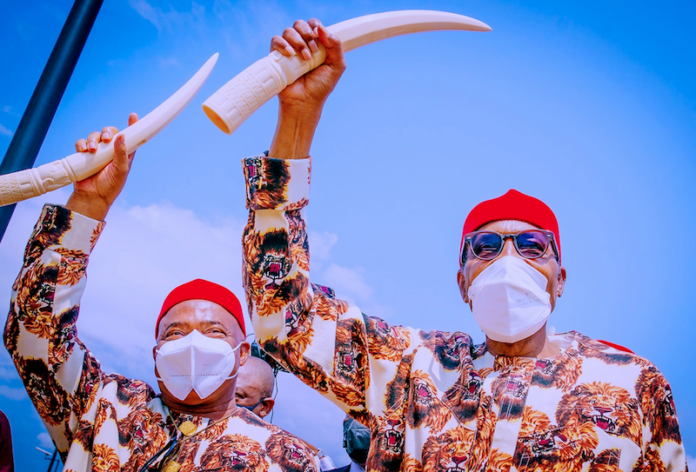 Contrary to insinuations doing the rounds, the Presidency, yesterday, declared that the visit by President Muhammadu Buhari to Imo State was a pleasant experience as he was overwhelmed by the reception accorded him by South East leaders during his official visit to the heartland of the east last week.

The presidency, therefore, clarified a statement credited to the President in Owerri, the Imo State capital, where he was quoted to have told Governor Hope Uzodimma that “I’ll be careful with your future invitations.”

The statement has since generated controversy in the state as the opposition had interpreted the statement to mean that the president was not satisfied with the visit.

To that extent, the state government has said the opposition in the state would continue to fail in their desperate bid to undermine the government of Senator Hope Uzodimma and by extension, that of Buhari.

President Buhari was in Owerri on a one-day working visit last Thursday during which he commissioned some projects and met with stakeholders, including Ndigbo leaders in the South East zone.

The statement read in part: “We have observed that President Buhari’s concluding remarks at the meeting with South East Leaders during his one day visit to Imo State is being deliberately contorted and twisted out of context.

“The purveyors of disinformation want Nigerians to believe that the President bluntly told Governor Uzodinma, ‘I’ll be careful with your future invitations.’ They have adduced different meanings to the phrase, contrary to the context wherein the President spoke during his successful dialogue with leaders of thought from Igboland.

“When he arrived at the banquet hall of Imo State Government House for his last assignment in Owerri, the President was welcomed by over 50 leaders from the South East, who had waited patiently for him for a Town Hall engagement, after commissioning strategic projects in the State.

“An elated President Buhari made it clear that he was expressly overwhelmed by the reception and galaxy of personalities that travelled from the five South Eastern States to have a heart-to-heart discussion with him in Owerri, the Imo State capital.

“His words were clear: ‘I am overwhelmed by this reception, overwhelmed in the sense that when I accepted the invitation by the Imo State Governor, who wants to justify investments the government has done to the people of Imo State, I thought I would see the bridges, the roads and a few renovations.

“He didn’t tell me he was going to get the whole Igbo leadership here. So, in the future when he invites me, I’ll know what to do. But I think he has done what the military didn’t like. He has achieved surprise. He has surprised me beyond description.

“Later, in his concluding statement at the same event, the President made reference to his earlier remarks on the ‘surprise’ action pulled by the Governor. On a lighter note, he quipped: ‘Governor of Imo State, I cannot thank you enough, but I will be careful with your future invitations.’

“The President’s historic visit to Imo State was very successful and the Igbo leaders, who met him shared the same enthusiasm that his coming to the Eastern heartland would bring peace, foster unity, encourage good and better understanding among the citizenry,” the statement stated.

The statement further noted that, “Archbishop David Onuoha, who is the Anglican Archbishop of Owerri Ecclesiastical Province, must have summed up the mood in the words of the prayer offered at the event: Thank You, dear Lord for our nation Nigeria and her people with diverse backgrounds, nationalities and cultures. Surely, you did not make any mistakes in bringing us together.

“Your purpose is for us to harness our potentials/strength to build a strong and virile nation. May this purpose never be defeated. Glory be unto You for bringing Your servant and our dear President, His Excellency Muhammadu Buhari, safely to this state. Blessed be Your name for his life and the giant strides he is taking for the wellbeing of our nation. Thank you for the huge infrastructural development that is taking place in various parts of the country.

“Lord, Nigeria is a great nation with numerous challenges. We pray that you endue our President with heavenly wisdom, grace and strength. In his resolve to serve this nation, he will not fail, fall or falter. He will end his tenure strong and well to the glory and honour of your name and the good of our people.

“May his visit today bring peace, foster unity, encourage good and better understanding among the citizens of this great nation; may it bring prosperity and restoration.’’

Meanwhile, the Imo State government, in a statement by Oguwike Nwachuku, Chief Press Secretary and Media Adviser to Governor, said the miniscule opposition in the state has been looking for a way to discredit the visit and embarrass Mr. President.

“In their desperation, they doctored and proceeded to post on social media platforms, a misleading video on President Buhari’s remarks during his Town Hall Meeting with highly respected Igbo leaders, who were in audience at the exclusive meeting, in total disregard for the good intention of Mr. President’s remarks,” the statement noted.

Sharing the view of the opposition, the statement added: “Because the opposition in Imo State are too bitter with hate to notice even the smallest of humours, nobody would have been surprised if they also lost their sense of understanding when President Buhari went humorous in his remarks.

“Let me explain to them what Mr. President meant in the language they will understand if at all they would be ready to learn. Pronto, President Buhari in appreciating Governor Uzodimma and the good people of Imo State for the superlative host would want to be as prepared as the Governor and the State next time he is visiting so as not to be ‘surprised’ again.

“Only those who do not mean well for Imo State will travel this lane that the opposition chose to travel to tweak Mr. President’s comment they know is absolute lie. Governor Uzodimma has done what no Igbo Governor, dead or living has been able to do with a sitting President’s invitation.

“I thought the opposition in Imo should be grateful for this rare feat, swallow their pride and commend him rather than destroying what is left of opposition politics. The earlier they realise that what they are doing is not about Governor Uzodimma the better for them.”