Falana: Judgement on VAT Will Strengthen Campaign for Restructuring 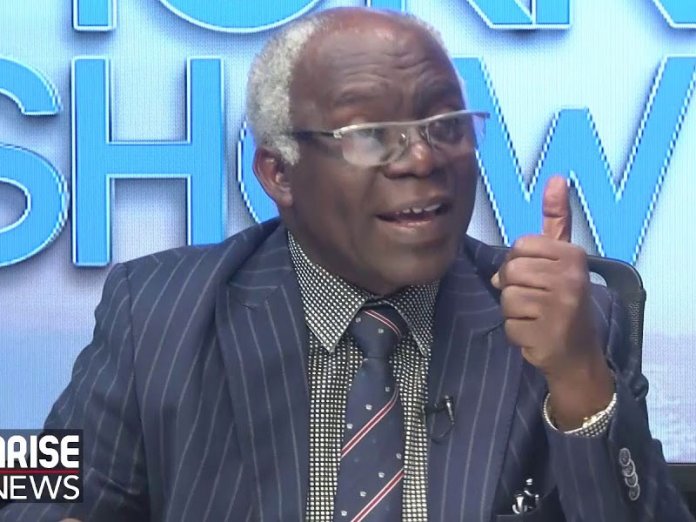 Human rights lawyer, Mr. Femi Falana, yesterday, said the judgement of the Federal High Court in Port Harcourt, which ruled against the administration and collection of Value Added Tax (VAT) by the Federal Inland Revenue Service (FIRS) not only corroborated the struggle for restructuring via litigation, but also strengthened the campaign.

Falana urged all state governments to team up with Rivers State Government to defend the judgement.

However, Falana warned that the FIRS should not be prevented from collecting VAT, pending the hearing and determination of the appeal. He said dispute over the enforcement authority of VAT, should not call for anarchy.

The lawyer added that, if implemented, Lagos State Government, believed to contribute about 70 per cent of VAT, would be the greatest beneficiary, followed by the Federal Capital Territory (FCT) with 15 per cent contribution to VAT.

Falana, a former President of the West African Bar Association (WABA), also contended that it was evident in the 1999 Constitution of the Federal Republic of Nigeria (as Amended) that VAT, “is neither listed in the Exclusive Legislative List nor on the Concurrent Legislative List.”

The legal luminary spoke in response to THISDAY’s enquiries on whether or not Rivers State Value Added Tax Law No.4 of 2021 was enacted in contravention of the provisions of the 1999 Constitution.

Justice Stephen D. Pam of the Federal High Court in Port Harcourt had ruled that the FIRS lacked constitutional authority to enforce and administer taxes not expressly stipulated under Items 58 and 59 of Part I of the Second Schedule to the 1999 Constitution.

Emboldened by the judgement of the Federal High Court, the Rivers State House of Assembly duly passed the State Valued Added Tax Bill No. 4 of 2021, which the state governor, Mr. Nyesom Wikne subsequently signed into law.

FIRS said in a statement by its Director of Communications and Liaison, Abdullahi Ahmad, advised taxpayers to continue remitting their VATs to the federal agency or face stiff penalties if they failed to honour their tax obligations.

But Falana, in response to THISDAY’s inquiries, explained away the constitutional provisions for the administration, collection and enforcement of VAT in relation to the power of the FIRS under the Value Added Tax Act, 2007, which had its foundation in the Decree No. 102 of 1993.

He said the judgement of the federal high court was consistent with Items 58 and 59 of Part 1 of the Second Schedule of the 1999 Constitution, which according to him, did not encompass the VAT or consumption taxes.

On this ground, according to him, the court decision that the Rivers State Government and not the federal government was constitutionally entitled to impose VAT, enforceable or collectable in its territory was in order.

Based on the judgement, the senior advocate challenged other states of the federation to file applications to join the case at the Court of Appeal as interested parties to defend the judgement of the Federal High Court.

Specifically, Falana explained that other state governments “will have to join Rivers State to defend the judgement of the Federal High Court. They are entitled to join the suit at the appellate court because any order from the appeal will affect them.”

Falana pointed out that in view of the valid and subsisting judgment of the Federal High Court, the Rivers State Value Added Tax Law No. 4 of 2021, “has not impugned any provision of the 1999 Constitution (as Amended).”

He said the judgement “will provide an opportunity for the appellate courts to review the contradictory judicial authorities on the legal status of VAT. Actually, there is a lacuna in the 1999 Constitution. The lacuna is that VAT is not on the Exclusive Legislative List, which was the basis of the judgement.”

Falana also observed that the judgement, “has a lot of implications for the dwindling revenue of the state and local governments across the federation,” which according to him, reinforced the call for other state governments to join the suit at the appellate court.

“VAT was increased from five per cent to 7.5 per cent last year by the National Assembly. Right now, VAT collected is between N1.5 trillion and N1.8 trillion per annum.

“VAT is fully collected by the federal government and payable into the federation account for distribution among the three tiers of government. Even though state governments have joined the campaign for resource control, the judgement is not in favour of the majority of them.

“If the judgement is implemented, the Lagos State Government, which contributes about 70 per cent of VAT, will be the greatest beneficiary. The Federal Capital Territory will be the next beneficiary with 15 per cent contribution to VAT.

“Apart from Rivers and about four other states that will benefit minimally, not less than 30 states will be adversely affected as they contribute little to the VAT. It is expected that apart from FIRS, which is allocated four per cent from VAT as cost of collection, other state governments may file applications to join the case at the Court of Appeal as interested parties.

“It is also interesting to note that the judgement does not affect the collection of import VAT on international trade. The judgement requires all stakeholders to take advantage of the current constitutional review to examine the collection of VAT as it is neither in the exclusive nor in the concurrent legislative lists under the 1999 Constitution.

“Since an appeal to the Court of Appeal together with a motion for stay of execution had been filed, the FIRS had simply enjoined all parties to allow the status quo to remain.”

He said FIRS should not be prevented from collecting VAT, pending the hearing and determination of the appeal. He said the dispute over the enforcement authority of VAT “is not a call for anarchy.”

Rather, according to the senior advocate, the process was meant to ensure that appeal that had been filed by the FIRS was not rendered nugatory. That was the practice in Nigeria, when the rule of law reigned supreme.

Falana also expressed reservations about the administration of President Muhammadu Buhari in terms of upholding the rule of law.

He lamented that the Buhari administration “has put the rule of law in abeyance by saying that court orders should pave the way for national security. A regime that has disdain for the rule of law cannot turn round to insist on compliance with court orders.”

To compound the crisis, Falana acknowledged that Rivers State Government “has enacted a Value Added Tax Law. The effect is that the law takes precedence over the practice of suspending action until the hearing and determination of the motion of the FIRS for stay of execution.

“As soon as the vacation of the courts ends, the FIRS will ensure that the trial court hears its motion for stay. If the motion is granted, the status quo remains but if it is refused the Rivers State Government will continue to collect VAT under the new law, because of the serious issues involved in the case, the legal battle will be pursued up to the Supreme Court.”

Insecurity: State Police is the Way to Go, Masari Insists

Kachikwu: How I Recovered My Vehicle from US Authorities