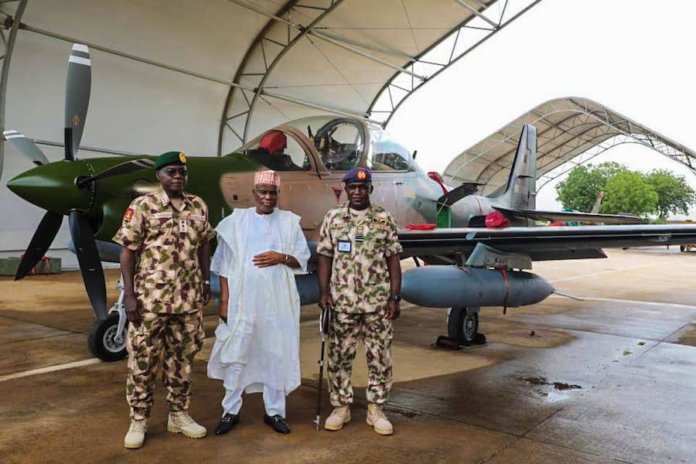 The Nigerian Air Force yesterday announced the arrival of A-29 Super Tucano fightear planes from the United States. The aircraft arrived Kano State at about 12:34pm.

The fighter jets were received by the Minister of Defence, Maj. Gen. Bashir Magashi (rtd) and the service chiefs.

The jet fighters were billed for delivery to Nigeria between 2021 and 2022.

The Airforce, had, in earlier statements said six of the fighter aircraft were to be delivered by July while the remaining six would be in Nigeria by December.

The Airforce had also completed construction of a hangar in Jaji, Kaduna State, where the attack aircraft would be domiciled.

A delegation of the House of Representatives had some weeks ago visited the United States to ascertain the state of the fighter jets.

The delegation had raised questions over the delay in the delivery of the fighter jets.
The first batch of 6 A-29 Super Tucano aircraft departed the United States of America on Wednesday, 14 July 2021 enroute Nigeria.

The Airforce had, in a statement, issued last week disclosed the flight path of the attack aircraft.

“The six aircraft will be leapfrogged through five countries including Canada, Greenland, Iceland, Spain and Algeria before arriving their final destination in Nigeria towards the end of July 2021.

“An official induction ceremony of the aircraft into the inventory of the Nigerian Air Force is already being planned at a later date in August 2021 to be announced in due course.

“The office of the Director of Public Relations and Information remains open to any inquiry regarding the arrival and induction of the aircraft”.

Air Commodore Gabkwet told THISDAY that the American Ambassador to Nigeria, Mary Beth Leonard, was in the United States to meet with pilots before they took off.

It was further gathered that the path taken by the fighter jets was designed to avoid the Atlantic Ocean route, a distance not usually flown by fighter aircraft.

$9.6b judgment: CCB gets petition against ex-CJN Belgore