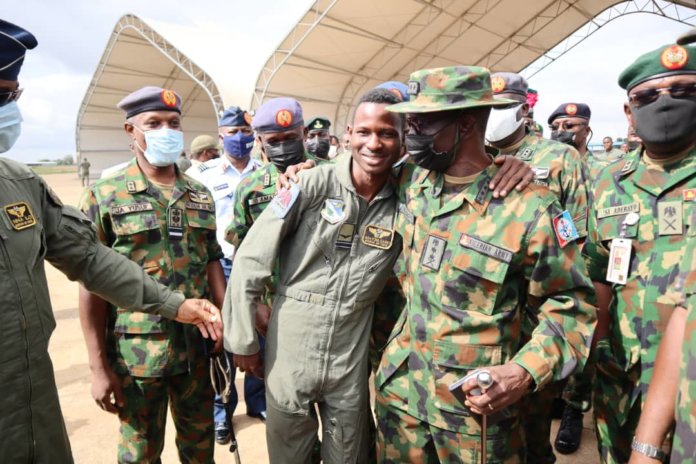 Irabor, who met the pilot in company with the Chief of the Air Staff, Air Marshal Oladayo Amao, before proceeding to a meeting with military veterans in the North-west, commended the pilot for the gallantry and bravery he demonstrated in the fight against banditry.

Earlier, the NAF had announced the crashing of a fighter jet in Zamfara State while returning from an interdiction mission.

A statement by the spokesman of the Nigerian Air Force, Air Commodore Edward Gabkwet, said the aircraft came under enemy fire, forcing Dairo to eject from the aircraft.

It said the crash occurred on July 18, 2021 at 12.45pm while the aircraft was returning from a successful air interdiction mission between the boundaries of Zamfara and Kaduna states.

The statement said the pilot after ejecting from the fighter jet, sought refuge in some settlements and evaded strongholds of bandits before locating a Nigerian Army unit where he was rescued.

The crash brings to four the number of military aircraft that crashed in the last one year.

“On 18 July 2021, at about 12.45 pm, a Nigerian Air Force (NAF) Alpha Jet aircraft, returning from a successful air interdiction mission between the boundaries of Zamfara and Kaduna State, came under intense enemy fire, which led to its crash in Zamfara State. Luckily, the gallant pilot of the aircraft, Flight Lieutenant Abayomi Dairo, successfully ejected from the aircraft.

“Using his survival instincts, the pilot, who came under intense ground fire from the bandits, was able to evade them and sought refuge in nearby settlements awaiting sunset.

“Using the cover of darkness and his phone set for navigation, Flight Lieutenant Dairo was able to elude several bandits’ strongholds and manoeuvred his way to a Nigerian Army Unit, where he was finally rescued.

“It is instructive to note that upon receipt of the news of the crash, the Chief of Air Staff, Air Marshal Oladayo Amao, had directed that all efforts must be emplaced to rescue the pilot”, it said.

“It is gladdening to note that while in hiding, Flight Lieutenant Dairo confirmed that the presence of NAF aircraft within the vicinity of the crash site helped in scaring the bandits who were after him, thus enabling him to find refuge and escape to a safe location,” it added.

The statement recalled that only recently, President Muhammadu Buhari had directed the Armed Forces of Nigeria to do all it takes to flush out criminals in Katsina, Zamfara and Kaduna States.

“It is in fulfillment of this directive that the NAF, in conjunction with surface forces, has in the last two weeks mounted intensive day and night air interdiction operations against bandits and their hideouts, especially in these three states.

“Through these intensive air operations, hundreds of bandits have been neutralised and several of their hideouts destroyed,” it said.

However, while praising Dairo for his gallantry, Irabor, in a statement by Defence Headquarters, urged Nigerian Air Force pilots to remain steadfast in the war against banditry.

“Before proceeding for the security parley, the CDS, Gen Irabor, in company of the Chief of the Air Staff, Air Marshal Oladayo Amao, met with Flight Lieutenant Abayomi Dairo, the NAF Alpha jet pilot, who survived the air crash yesterday.

“The CDS commended the fighter pilot for his gallantry and bravery, which he demonstrated in the fight against banditry.

He encouraged NAF pilots to remain steadfast in the task of national security,” the statement added.

Irabor, who also met with military veterans, lamented the rising state of insecurity in the North-west.

He said: “The necessity of this gathering today, which is of course to engage with you (military veterans), and by extension the larger society, is partly what is responsible for the safe return of our cherished pilot. We believe that going forward, greater gains will be made as we undertake this operational task.”

Irabor, who spoke at the second edition of security parley, tagged “Chief of Defence Staff Interaction with Retired Senior Military Officers in North-west Geopolitical Zone,” held yesterday in Kaduna, said the Armed Forces of Nigeria (AFN) was constantly reviewing its techniques, tactics and procedures as well as operational doctrines to be in tandem with the requirements for the containment of the security threats.

Oil Price Rebounds to $66 Ahead of OPEC Meeting