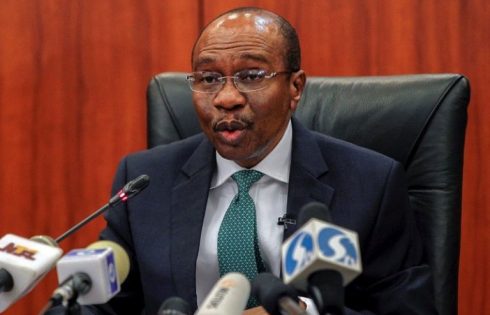 The Central Bank of Nigeria officially devalued the naira to 410.25/$ after the country’s currency defied all interventions to retain its value.

However, experts have said that the last resort employed by the CBN to adopt the NAFEX Investor & Exporter forex window rate of N410.25 as its official exchange rate to the dollar would lead to inflation and increase the poverty level in the country.

The CBN confirmed the new official rate on its website after it had removed N379/$ earlier in May.

The Punch had recently exclusively reported that the naira officially depreciated to 410/$, quoting the Central Bank Governor, Godwin Emefiele.

Emefiele had said that the drop in crude oil earnings and the associated reduction in foreign portfolio inflows significantly affected the supply of foreign exchange into Nigeria.

“In order to adjust for the decrease in supply of foreign exchange, the naira depreciated at the official window from 305/$ to 360/$ and now hovers around N410/$,” he had said.

A former Director-General, Chartered Insurance Institute of Nigeria, Mr Richard Borokini, said this move was part of efforts to unify the exchange rates.

According to him, as long as some sectors such as the Bureau de Change got the dollar at differential rates, the unification would not be achieved.

A former President, Association of National Accountants of Nigeria, Dr Sam Nzekwe, said the move would lead to imported inflation because importers would get more expensive forex from the Bureau de Change.

“The agric sector that is supposed to be cushioning the situation, the people cannot do anything because of the insecurity issues. They cannot go to farm; so we are unable to take advantage of the comparative advantage in agriculture because of activities of bandits.”

Ordinarily, he said, the devaluation would not have made any difference, but now the BDCs would further increase their own rates because of shortage of forex for importation.

A professor of economics, Babcock University and past President, Chartered Institute of Bankers of Nigeria, Prof. Segun Ajibola, noted that the CBN had been trying to defend the value of the naira to achieve some stability.

However, he said, there was little the CBN could do because of the exposure to the foreign market.

Ajibola said, “The implication is, we are likely to witness cost push inflation because inflation will rise and they will pass that to the end users that are consumers, so the overall impact is that it will likely worsen poverty. The poverty index is likely to rise.”

He observed that the issues causing dislocations could not be fixed overnight because dealers would start to review the prices of replacement of the goods.

According to him, it is important to continue to use locally produced goods because continuous reliance on imported items would put more stress on the exchange rate.

The CBN had in April 2017 established the I&E forex window as part of efforts to deepen the foreign exchange market and accommodate all forex obligations.

The purpose of the window was to boost liquidity in the forex market and ensure timely execution and settlement for eligible transactions.

Buhari Not in Support of Open Grazing, Presidency Clarifies