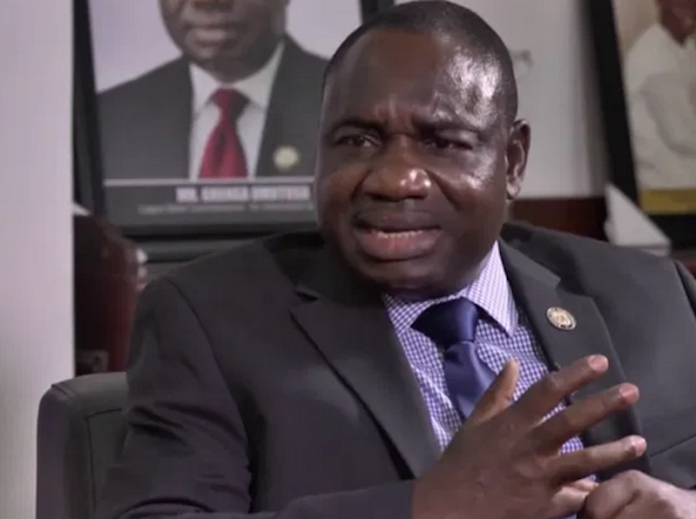 Attorney-General and Commissioner for Justice Mr. Moyosore Onigbanjo (SAN) recently announced the introduction of an online platform for checking the status of Legal Advice and printing of Certified True Copies as part of initiatives of the Sanwo-Olu administration to enhance access to justice.

Onigbanjo stated that by October this year, six courts will be fully automated to provide Realtime Transcript Solution services for cases handled in the State while parties involved would have the opportunity to apply for transcripts of cases immediately after court sessions.

The Attorney-General spoke on Wednesday while presenting the Ministry’s scorecard for the past two years at the Y2021 Ministerial Press Briefing.

Noting that the emergence of COVID-19 spurred the initiative of virtual court sittings in Lagos courts, the Commissioner for Justice recalled that the first virtual hearing in Lagos was held on 4th May, 2020.

“The virtual hearing was the first in Lagos and anywhere in Nigeria,” Onigbanjo said.

Speaking on the incessant attacks on law enforcement officers, he said 10 persons had been arraigned before the courts for assaulting LASTMA and Task Force officials, pointing out that 62,477 traffic offenders were arrested and arraigned for prosecution within a year.

His words: “The DPP is currently prosecuting 1,860 cases at the High Courts and Magistrate Courts, including 10 offenders who have been so far charged over attacks on officials of the Lagos State Traffic Management Agency (LASTMA)”.

Outlining some other achievements of the Ministry, the Attorney-General noted that the Directorate of Civil Litigation obtained 18 rulings and 34 judgments in favour of the Lagos State Government. He said the Directorate helped the State reduce its contingent liabilities worth N95 billion Naira.

Citing an example of such cases, Onigbanjo said the Federal High Court on February 3, 2021 in Olukoya Ogungbeje v Lagos State Government and seven others, affirmed the position of the government restricting the use of motorcycles and tricycles as a means of transportation on specific routes within the six local governments and nine local development areas in the state.

Meanwhile, the property at Osborne Foreshore Estate, Ikoyi, Lagos, proposed by the Lagos State Government for the relocation of Igbosere High Court will be ready by the end of this month, Attorney-General and Commissioner for Justice Moyosore Onigbanjo, SAN, has said.

Speaking at the Ministry’s Ministerial Press Briefing tagged ‘Our journey between April 2020 and April 2021’, Onigbanjo explained that this and ongoing statewide construction and renovation of courts were part of Governor Babajide Sanwo-Olu’s efforts to enhance access to justice.

He spoke of the ongoing upgrade of the Ministry’s website and social media handles as well as the introduction of Case Management Systems within the MoJ to improve efficiency.

Onigbanjo highlighted the MoJ’s efforts to boost law enforcement agencies’ performance by building statement recording/interrogation rooms for the police to enhance prosecution of cases and resolve allegations of torture to obtain facts from suspects.

The Igbosere High Court, the country’s oldest and most recognisable judicial building, was attacked on October 22 by hoodlums under the guise of #EndSARS protest.

The criminals spent hours looting and vandalising vehicles, furniture, refrigerators, air conditioners and office equipment, among others, before burning down the entire court complex.

In recognition of the important role of Micro, Small and Medium Enterprises (MSMEs), especially as a springboard for economic recovery, the Lagos State Government has reiterated its commitment to the growth and development of the MSMEs to ensure their survival beyond the global pandemic period.

The Commissioner for Commerce, Industry and Cooperatives, Mrs. Lola Akande, made the remarks during the ongoing Y2021 Ministerial Press Briefing organised as part of the activities to mark the second anniversary of the Governor Babajide Sanwo-Olu led administration.

Mrs. Akande gave assurance that the Government will continue to provide strong platforms such as the organisation of MSMEs Exclusive Fair to support Entrepreneurs to get the required linkage that will facilitate business development as well as trade promotion in line with the fourth pillar of the T.H.E.M.E.S Agenda, which is Making Lagos a 21st Century Economy.

In her words, “The annual Lagos MSME Exclusive Fair is undeniable evidence of the State Government’s unshaken dedication to the continuous growth of the MSME sector in the State”.

The Commissioner listed some of the initiatives aimed at enhancing the growth of MSMEs to include the Eko MSMEs Fashion Hub 1 established in collaboration with the Federal Government to boost the fashion and apparel industry; the e-Commerce digital platform created to showcase MSMEs products and services to the world and the establishment of Lagos State Export Promotion Committee to promote the marketability of locally made products.

Others include the Lagos Council on MSMEs, a broad-based platform comprising State and Federal Government agencies for the harmonisation of State-wide dispensation of national and local MSME promotion, policies, measures and programmes and the National Awareness and Sensitisation Tour held to promote the Africa Continental Free Trade Area Agreement (ACFTAA); the commemoration of the African Industrialisation Day/Young African Industrialists Week during which business clinics were held to deepen the knowledge of MSMEs.

According to her, the present administration will soon complete the construction of 44 Factory Units-Imota Light Industry Park, which is about 86% completed, in a bid to continue to sustain the Small Scale Industrial Estates at Mushin and Isolo as well as the industrial shed at Sabo in Ikorodu, while plans are ongoing to develop a new Small Scale Industrial Estate at Gberigbe, Ikorodu.

Speaking further, the Commissioner maintained that the government remains committed to providing a conducive environment for the Organised Private Sector and other stakeholders through continuous engagement in the implementation of policies, regulations and projects as they impact the business prosperity of the State.

Akande mentioned that the various projects being executed with the private sector at the Lekki Free Trade Zone are already yielding great dividends, just as she noted that despite the pandemic over 230 jobs were created through the Alaro City project, a joint venture project designed and owned by Rendeavour Nigeria Development Company Limited and the Lagos State Government, through Lekki Worldwide Investments Limited in the ratio 60% and 40 % respectively.

She also averred that the Sanwo-Olu-led administration will continue to protect and promote the rights of consumers of goods and services through consumer education, scientific investigation, mediation, monitoring and enforcement of the Law against producers of adulterated and fake products.