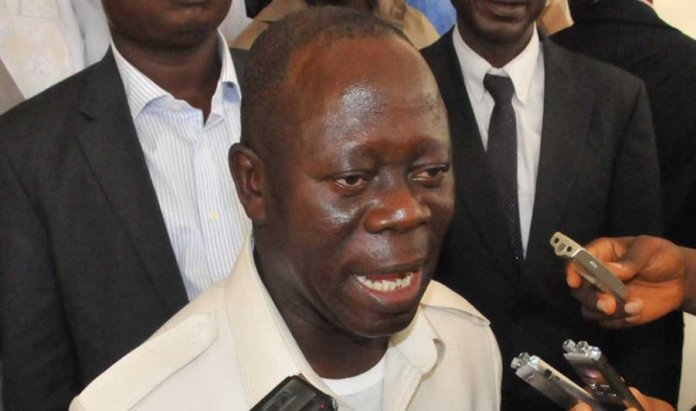 A former National Chairman of the All Progressives Congress (APC), Mr. Adams Oshiomole, has described the call for military takeover of a democratically elected government as irresponsible and senseless.
Oshiomhole’s reaction followed a recent call by legal luminary, Chief Roberts Clarke, in an interview on television, for military intervention in governance in order to fix the country’s festering security challenges and to carry out restructuring of the country.

The former national Chairman of APC spoke yesterday in Abuja when the leadership of the Law Students Association of Nigeria (LAWSON), paid him a courtesy visit, during which they invited him to their forthcoming National Conference on Rule of Law.

He stated: “I watched on a national television one of your very senior colleagues, Chief Robert Clarke, I was shocked when I saw him calling on the President to handover to the military.

“I thought that was the height of irresponsibility, given his knowledge, given his age and a very senior member of the bar and, what is it that he wanted? He wants a military that will restructure Nigeria.
“It is again for me senseless, because the structure as it is today, who put it in place? Who overthrew the parliamentary system?”

The former Edo State Governor was of the opinion that the first thing that suffers under the military is the rule of law, adding that for anyone who is familiar with the military system, like Clarke, should tender apology to Nigerians.

“You know we have freedom of speech but it does not include the freedom to canvass unlawful means to effect a change. When you canvas unlawful means, then you should be arraigned before a court of law and dealt with according to the law. Ignorance is not even an excuse in law, not to talk of a Senior Advocate of Nigeria.”
Oshiomhole called on Nigerians to have faith in the country in spite of the challenges, while urging everyone not to give up.

He said, “I think that even in our moment of distress and regardless of what anybody thinks, the world has resolved and Nigeria is part of it, that never again shall we be governed by an unelected government, never, we don’t want unelected Angels.”

“Why is Europe spending so much time forming the European Union to create a larger market? Recently, we signed the African Trade Agreement so that Nigeria can access a bigger market. We already have a local market of 200 million. If we can keep it flourishing and increase the purchasing power of the citizens, we already have a huge market. That should be an asset. That diversity should be an assest.”

Ecobank Nigeria has gone into partnership with a media entrepreneur an…
June 23, 2021

The African Development Bank Group (AfDB) has announced the appointmen…