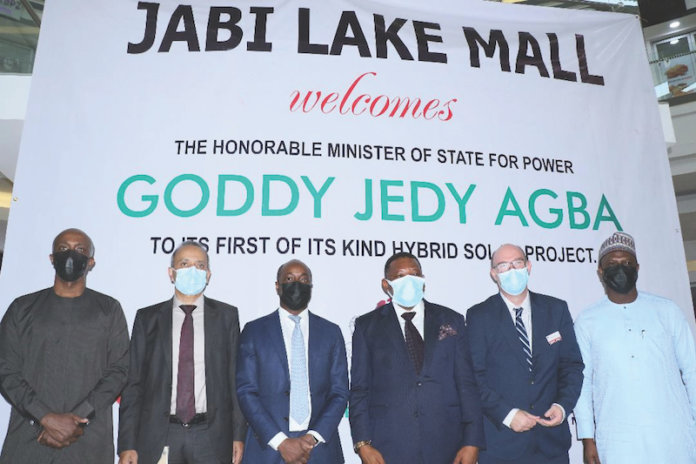 As the world embraces the Paris Agreement on Sustainable Development, the 609kwp solar hybrid power plant at Jabi Lake Mall, Abuja, Nigeria, the first rooftop facility for a Nigerian mall, which was recently inspected by the Minister of State for Power, Goddy Jedy-Agba is another example of Nigeria’s pioneering role in clean energy transition. Sunday Ehighiator reports

The rising cost of electricity in doing business is a major thorn in the flesh of budding entrepreneurs and even already established large scale firms in third world countries. The trend is gradually changing as Actis UK, along with CrossBoundary inaugurated a 609Kwp Solar Hybrid project at Jabi Lake Mall, Abuja a year ago. This first of its kind renewable energy for a Nigerian mall, will cut the Mall’s reliance on polluting diesel generators, thereby reducing carbon emissions by over 13,000 tonnes in line with the Paris agreement on SDG. This clean energy is an excellent example of private investments in renewable energy in Nigeria.

Acccording to an outlook statistics by the Manufacturers Association of Nigeria (MAN) in March, the cost of electricity accounts for 40 per cent of their production cost, which also accounts for the increase in the price of goods and services. Despite this high cost of electricity, more business firms are daily complaining of the epileptic power supply and the quality of electricity when it is available. According to Mr. Joe Onuoha, a water and beverage producer in Abuja, he would always turn on his diesel-powered generator, away from grid electricity during production to avoid breaking the chain in the event of grid power interruption.

However, 106 Micro, Small and Medium-scale Enterprises (MSMEs) owners have seen their electricity bills dropped by 30 per cent at the Jabi Lake Mall in Abuja.
This was after its manager, Actis UK commissioned a 609 kilowatts peak (kWp) solar hybrid power plant that drastically cut down the reliance on diesel generators and reducing carbon emissions in line with the COP26 Energy Transition Campaign.

The Minister of State for Power on Monday, April 19th, 2021 inspected the Jabi Lake Mall solar hybrid power plant that has powered the facility for 14 months. Commenting on this innovation of Actis, a United Kingdom managed firm, the minister called on investors to urgently replicate this to drive down the energy cost for MSMEs. “Actis is proving that one can cut down energy bills through this project and this should be replicated in other places,” said Jedy-Agba.

Beyond running independent off-grid solar mini-grid, the minister advised investors to consider the hybrid model like the Jabi Lake Mall where they can partner with the Distribution Companies (DisCos) who have the franchise to integrate solar energy into grid power supply for commercial and industrial facilities.

“The solar hybrid project at Jabi Lake Mall is another example of Nigeria’s pioneering role in clean energy transition,” said Jedy-Agba.
According to Actis, which is driving the hybrid model with support from the United Nations Special Representative of Secretary-General for Sustainable Energy for All, Ms. Damilola Ogunbiyi, the visit of the minister to the hybrid power plant was for three objectives. It is to showcase large scale sustainable solar energy projects in Nigeria, to highlight private sector investments (Actis) in sustainable buildings and power supply in Nigeria and to recognize world class clean energy projects in Nigeria in line with the Paris Agreement and UKCOP26 Energy Transition Campaign (ETC).

Ogunbiyi, who is also the CEO of Sustainable Energy for All, had stated prior to the visit that the project was a good example of energy transition in Nigeria, to clean and reliable energy.
“This represents a good example of a UK private sector companies like Actis are implementing a just, inclusive and sustainable energy transition at scale across the African continent with a particular focus on energy efficiency and renewable, in line with the Sustainable Development Goals (SDGs) and UK’s COP26 Energy Transition Campaign,” said Ogunbiyi.

Actis Principal, Mr. Tolu Sokenu, who explained the plant’s component during the minister’s visit, said Actis/Jabi Lake Holdings Limited own the 25,000 square metres mall, which is the first of its kind in Abuja, hosting 106 brands that include Shoprite, Game, and Silverbird as well as parking capacity for 733 vehicles.

“Jabi Lake Mall adopted a “green-by- design” approach, guided by Leadership in Energy and Environmental Design (LEED) Sustainability Principles,” said Sokenu.
He also said Actis “is a signatory to the United Nations backed Principles for Responsible Investment (UNPRI).”
In Nigeria, Actis has created and managed four assets, delivered over 100,000 square metres of lettable area with over $500 million asset value. Some of these projects include Heritage Place, Ikoyi and Jabi Lake Mall, Abuja.

Explaining the project components, he said, 1,848 solar photovoltaic (PV) panels generate 850 megawatts hour (MWh) of electricity annually and has a 15 year Solar Power Purchase Agreement (SPPA) between Jabi Mall Development Company Ltd and CrossBoundary Energy, the developer.
It is targeted to reduce carbon emissions by 13,000 tonnes as it is the first solar rooftop facility for a Nigerian mall, cutting the energy bill by 25 to 30 percent, said Sokenu.

On the billing, Sokenu told the minister that the primary focus of the operator was to cut down the energy bill by 30 percent which has been achieved. “The bills of tenants are cheaper as 30% of energy is delivered by the solar plant. When we expand, we could scale up more which will translate to more savings on their energy bills.”

The Business Development Manager, CBE, Ugo Nwankwo, said the Jabi solar power plant had already cut down carbon emission by 413.78 carbon dioxide, equivalent to planting 39,220 trees.
He also said the project, due to its innovativeness, won both the industrial and commercial awards by the Africa Solar Industry Association (AFSIA) recently.
Also speaking during the visit, the Deputy High Commission, United Kingdom Ben Llewellyn-Jones, said there was a need for more private sector-led partnerships. Earlier, he had lauded Actis for the project.

“I am delighted that Nigeria is a prominent member of the COP26 Energy Transition Council, which seeks to accelerate the transition to clean power as part of a green economic recovery, through enhanced cooperation,” he said.
The Country Director, World Bank, Shubhan Chaudhuri, urged the replication of the project across similar commercial establishments in Nigeria.

An official of the United Nations Development Programme (UNDP), Mohammed Yahaya, also urged the federal government to adopt the Kenyan model which has no regulatory hurdle for developers with other incentives to do more as the excess power is channeled into the national power grid.