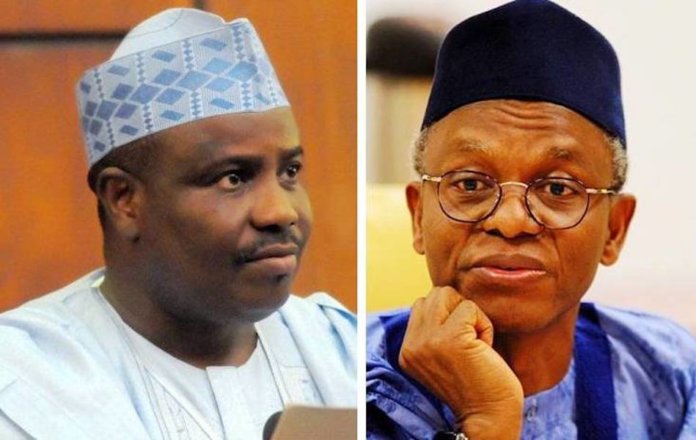 Kaduna State Governor, Mallam Nasir el-Rufai, and his Sokoto State counterpart, Hon. Aminu Tambuwal, yesterday called for cooperation among the seven states in the North-west in tackling banditry and kidnapping.

The duo spoke in Sokoto when el-Rufai visited to condole with Tambuwal over the death of Hajia Aishatu, the daughter of the late Premier of the defunct Northern Nigeria, Sir Ahmadu Bello.
While el-Rufai was in Sokoto, a statement by the Kaduna State government vowed not to surrender to criminals terrorising the state, stressing that the duty of the state is to uphold the law and not to reward hoodlums for violating the lives, property and liberties of citizens.

According to another statement signed by Tambuwal’s Special Adviser on Media and Publicity, Malam Muhammad Bello, el-Rufai commended Tambuwal’s unflinching commitment to the pursuit of peace and security in all states, especially in the North-west.

He stated that governors of the seven states in the North-west have been working closely with President Muhammad Buhari to end banditry and kidnapping in the zone.

He described Tambuwal’s role in tackling banditry in the area as complete, fraternal and unbiased.
He said: “I want to express my appreciation to Governor Tambuwal for cooperating with us in a totally, brotherly and non-partisan manner to bring the whole of the North-west together. May Allah reward you with His blessings.”

He, however, expressed concern over the rising cases of kidnapping and banditry in the zone and its effect on the public.

“There is concern on the sufferings that people face, as they have been going through difficulties because of these attacks occasioned by bandits.

“From Sokoto, Zamfara, Katsina, Kaduna and parts of Kebbi and Niger States, our people have been going through trials and tribulations arising from the activities of bandits.

“As governors, we have been meeting, putting our heads together to do the best we can. The last meeting we had was last Thursday with the president.

”We expressed our concerns and came up with a critical road map to end this banditry in our region once and for all,” el-Rufai said.

Tambuwal stated that the security challenges in the zone have become worrisome and a great source of concern to all the governors in the region.

Tambuwal said the latest was the murder of a Divisional Police Officer (DPO) and eight policemen in Kebbi on Monday and the recent attack on Dange Local Government of Sokoto State, during which lives were lost.

“We must all put our hands on deck to ensure that we nip this thing in the bud,” he said, adding: “As you rightly said, we have been working together and collaborating. There’s no issue of party.”
He said security and development have nothing to do with party, explaining that it is all about the people that they represent.

Meanwhile, the Kaduna State government has vowed not to surrender to criminals, saying it would not waver in discharging its duty to uphold the law and not to reward hoodlums for violating the lives, property and liberties of citizens.

In a statement by the Special Adviser to the Governor on Media and Communication, Mr. Muyiwa Adekeye, the state government stated that it would not negotiate with criminals.

It acknowledged that el-Rufai had in a 2014 interview called on former President Goodluck Jonathan to use all options, including negotiation, to rescue the Chibok girls but added that the situation is different now.

It said: “The years since 2014 may have led some people to forget the denial and doubt that defined the federal government’s response to the Chibok abduction, especially the initial refusal to acknowledge that it happened. That was the context under which civic pressures were brought on the government.”

The state government added that Nigeria’s journey since 2014 Chibok tragedy has proven that the solution to violent crimes, including terrorism and banditry is a robust response from the state and its coercive agencies.

According to the statement, the money paid as ransom following many negotiations with bandits have not stopped kidnappings, reduced their frequency or deterred the criminals.

“The experience of many states in the North-west of Nigeria since 2015 has included cattle rustling, kidnappings, killings and the devastation of communities by criminals. Several states sought to negotiate their way out of the problems by talking to bandits, paying them money or offering them amnesty. This has not worked and has only encouraged the criminals to press ahead for a surrender of the public treasury to them. That is clearly not in the public interest,” the statement added.

It stated that negotiations and ransoms have not stopped the criminals but have only encouraged them.

“It is only prudent to review one’s position when the facts change and the suggestion made by a citizen years ago cannot be taken as the immutable answer to a serious problem that has evolved since 2014, no matter the viral replays of the said video clip,” it said.

The Kaduna State Government said it had been consistently transparent about its security challenges.
“It has supported and continues to resource the security agencies in the state. We are engaging the federal government to have security responses that move away from the reactive response of repelling bandits towards a comprehensive, proactive offensive that takes the battle to the criminals and uproot them. As a sub-national, with no direct control of any of the security agencies, we cannot make this task more difficult by giving criminals the resources to acquire more arms,” the statement said.

The state government said it regretted the recent kidnapping and killings of students from tertiary institutions in the state, and sympathised with their families with whom it also shared the aim of the safe return of all the students.

It said: “We mourn the dead students and we offer our condolences to the family and friends of the deceased. The ruthless and the heartless resort of the kidnappers to murdering these young persons is part of their effort to further their blackmail and compel us to abandon our ‘no-ransom, no negotiation policy. Are people bothering with the consequences of state surrender to hoodlums, or is the continued politicisation of security challenges not going to make all of us ultimately victims of the insurgents?”