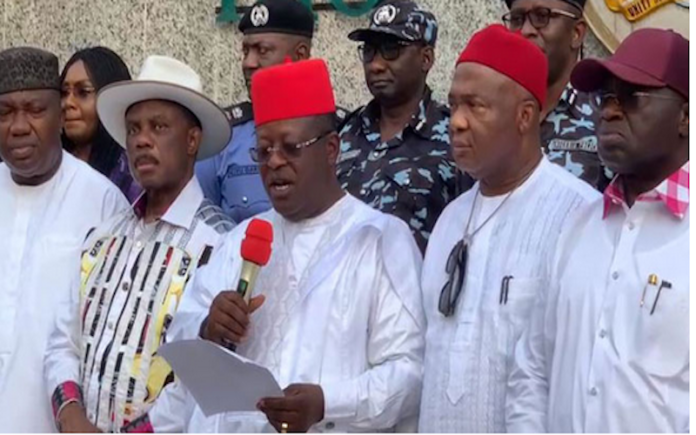 The governors, in a communiqué issued in Owerri at the end of a meeting asked the heads of security agencies in the zone to draw up a comprehensive list of their logistics and material needs that will enhance their efficiency in combating the security challenges in the zone, so that the governors could provide them.

The meeting was the first gathering of the governors since last week’s attacks by gunmen who invaded the headquarters of the state police command, torching about 100 vehicles and freeing some detainees.

The gunmen also attacked the Imo State Correctional Centre and released over 1,800 inmates.
In the communiqué read by the Chairman of the South-east Governors’ Forum and Governor of Ebonyi State, Mr. Dave Umahi, the governors aligned themselves with the efforts of the federal government to find the solution to the security challenges in the country.
They condemned what they called terrorism and banditry in any part of Nigeria, particularly in the South-east.

They condemned the recent burning of police stations, violent attacks on custodial centres with the unlawful release of inmates, and the killing of security personnel, natives/farmers and herdsmen.
The governors said they were on the same page with the federal government on the need to tackle the security challenges in the country.

They committed themselves to joining the federal government to fight terrorists and bandits.
They also “resolved to bring together all the arsenals at their command, as one united zone, to fight and flush out criminals and terrorists from the zone.”

The communiqué noted that to achieve this, “there is a need to galvanise all the relevant stakeholders in the South-east, the political class, the business community, the bureaucrats and the intelligentsia to provide all necessary support to security operatives in the five South-east states to ensure total success in the fight against criminality in the zone.”

According to the communiqué, “The heads of all the security agencies in the South-east have resolved to exchange intelligence in a seamless, effective new order that will help to checkmate crime in the zone.
“To fast-track crime-busting in the South-east, the heads of security agencies have been mandated to draw up a comprehensive list of their logistics and material needs for sustainable success in the fight against criminality, for the immediate provision by the leadership of the South-east.”

The governors also requested the Acting Inspector-General of Police (IG), Mr. Usman Baba, to stop the influx of IG monitoring units and allow police commissioners and state and zonal commands to handle their cases.
The governors also requested Baba and other security chiefs to invite the leadership of Ohanaeze Ndigbo and the Christian Association of Nigeria (CAN) to find out the reason for increasing insecurity of the region.
They also agreed that military policing in the South-east should be adequately funded to become effective.
“Meeting agreed that open grazing has been banned and the security agency should implement the ban.
“The meeting encouraged a peaceful co-existence of farmers and herders to allow governors to succeed in the fight against criminality,” the communiqué added.