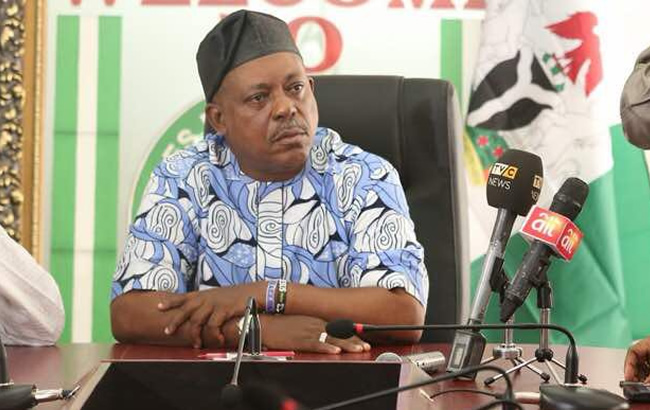 A law firm, Adeyemi and Partners, has asked the National Chairman of the Peoples Democratic Party, Uche Secondus, to ensure that the party’s South West Zonal Congress slated for Saturday did not hold as scheduled.

This development came at a time the party leadership summoned the Oyo State Governor, Seyi Makinde; and a former governor of Ekiti State, Ayodele Fayose, for a reconciliation meeting.

The law firm, in a letter dated April 6, 2021, a copy of which our correspondents obtained on Wednesday, attributed its position to a subsisting court order.

The letter was signed by Rasheed Kolawole-Taiwo, Victory Uneh and Emmanuel Inyang on behalf of the law firm.

Recall that Makinde had in a statement last week warned the National Working Committee of the party against shifting the date of the congress.

According to the governor, “any attempt to shift the date of the PDP zonal congress from April 10 is a signal to party loyalists that the hierarchy has been compromised,” an action which he said would lead to “dire consequences.”

But the lawyers, in the letter, called Secondus’ attention to a January 19, 2021 court order compelling the parties to a suit to refrain from taking any action in respect of the South West PDP congress till the final determination of the suit.

The suit referenced in the letter was FHC/L/CS/63/2021- Hon Dayo Ogungbenro and 11 others (members of the caretaker committee of the South West PDP) Vs. Prince Uche Secondus and two others.

The lawyers advised Secondus and the PDP to thread with caution on the congress slated for Saturday “or risk the grave consequence of contempt.”

They said, “The honourable court in the instant case made the ex-parte order of January 19, 2021 to read ‘pending the determination of the suit.’

“Hence, there is no gainsaying that the nature and form in which the honourable court has made the ex-parte order of January 19, 2012, it is not to lapse on 14 days but to be valid and subsisting pending the determination of the instant suit.”

They further argued that since steps have been taken towards the conduct of the congress on Saturday in disobedience of the court order, the party’s national chairman and other party chiefs are in contempt of the court order and “as such are liable to be committed to prison by the court.”

The lawyers also stated that the suit is still ongoing and it is slated for hearing of all pending applications on April 16, 2021.

They added, “In the circumstance, it is our professional advice that the PDP or any of its agents, privies or howsoever describe is to obey the order made by the honourable court on January 19, 2021, and put a halt to steps taken towards the conduct/actualisation of the South West zonal congress for April 10, 2021.

“We have no doubt that the PDP is commendably alive to respect the rule of law and ensuring necessary obedience will no doubt portray the party as an institution that respects the rule of law which has been acclaimed as the bastion of democracy.”

It is expected, however, that the PDP NWC will make a final decision on the congress after an emergency meeting scheduled to hold on Wednesday night.

The NWC held a marathon meeting at the headquarters of the party in Abuja for several hours on Wednesday to resolve the crisis between Makinde and Fayose’s factions.

The party has, therefore, summoned the two gladiators to an emergency meeting scheduled to hold Wednesday night.

The PDP, in a statement by its National Publicity Secretary, Kola Ologbondiyan, after the NWC meeting, said the Bukola Saraki-led Reconciliation Committee had summoned Fayose and Makinde to the meeting.

The party said the NWC would meet again on the outcome of the meeting and take a final decision.

The statement read in part, “The National Working Committee of the Peoples Democratic Party after an extensive meeting has scaled up processes for reconciliation as it affects South West Zonal Congress of the party.

“The NWC resolved as follows: that beyond the legal conundrum in our party’s formation in the zone, the PDP must win the South West.

“The NWC will meet on the outcome of this reconciliation meeting within the next 24 hours.”

I’ve not been arrested, Igboho says in recorded speech