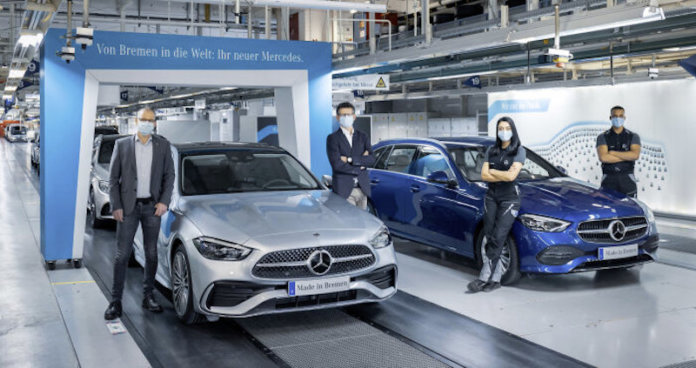 Mercedes-Benz is producing the C-Class with maximum flexibility, efficiency and digital networking.

The automaker released details of the new machine, stating that The Saloon and Estate models of the new C-Class are starting to leave the production line at the Mercedes-Benz plant in Bremen. The bestselling Mercedes-Benz model series over the past decade will start production in Bremen, the lead plant in the global C-Class production network. This will shortly be followed by start-ups at international locations in Beijing, China and East London, South Africa.

Hybrid models will follow in quick succession – as part of the “Electric first” strategy equipped with battery systems supplied from the Mercedes-Benz battery plant in Jawor, Poland.

Production follows the latest production methods and processes including a new body shop system, improved flexibility, efficiency and sustainability. Thanks to innovative technologies, the paintshop at the plant in East London reduces energy consumption per vehicle by 25 percent.

“With the start of production of the new C-Class, our global production network is once again demonstrating its great flexibility. Our teams at three plants on three continents have shown first-class cooperation with their ability to master the sequence of production ramp-ups. This is how our modern plants are able to produce outstanding vehicles like the new C-Class,” says Jörg Burzer, member of the Board of Management of Mercedes-Benz AG for Production and Supply Chain Management.

Different production and powertrain variants can now already be flexibly realised and manufactured by Mercedes-Benz in the body shop. The new body shop system is being deployed for the first time in C-Class production at the Mercedes-Benz plant in Bremen. Unlike in a traditional body shop, where the individual body parts are produced in line, the new body shop consists of various production cells, called “cubes”, which can be flexibly combined with each other.

The cubes are fully networked with each other to use the advantages of big data.

The new body shop concept will be deployed successively in Mercedes-Benz plants worldwide.

Modern assembly system: efficient bundling of technology Production of vehicles with different powertrains also plays a decisive role in the assembly shop of the Mercedes-Benz plant in Bremen. The C-Class is assembled on the same line as the GLC, the GLC Coupé and the all-electric EQC (combined power consumption: 21.5 kWh/100 km; combined CO₂ emissions: 0 g/km)[1].

Maximum flexibility is required here as well: a new TecLine in Bremen, modelled on Factory 56 at the Mercedes-Benz Sindelfingen site, represents the assembly system of the future. The TecLine bundles complex systems technology in one central location. This means that conversion work is even simpler and faster to carry out.

At the Mercedes-Benz plant in Bremen, the principle of “digital shopfloor management” is used in all production areas – from the press plant to the body shop, surface finishing and final assembly. This allows all production data to be tracked in real time.

The quality of a vehicle can therefore be assured in real time with the MO360 application QUALITY LIVE. For this purpose QUALITY LIVE uses all data that are collected in the production process.

On the road to zero-emission mobility, Mercedes-Benz is also playing a role to reduce emissions during production. The company-owned plants will produce on a CO2-neutral basis from 2022.

At Mercedes-Benz, models with alternative drive systems such as the plug-in hybrids of the new

C-Class are integrated flexibly and sustainably into ongoing series production and the existing facilities – both in assembly and in body shop.

In surface finishing, a new CDP dryer, which is responsible for protecting the vehicles against corrosion, ensures energy savings of around 24 percent compared with conventional systems.

In addition, roofs with green areas such as the total of 40,000 m² at the new body shop building contribute to compensation for the sealed floor areas, and at the same time ensure improved temperature control in the building.

Michael Frieß, Location Manager and Head of Production at the Mercedes-Benz Bremen Plant:

“Our Bremen team has done a great job in the last few months. Despite the challenges imposed this year, our employees have successfully managed the start-up of the new C-Class and at the same time provided optimal support to our colleagues in the other C-Class plants. We are proud of this, and are already looking forward to more Bremen start-ups in 2021”.

Michael Peters, Chairman of the Works Council at the Mercedes-Benz Bremen Plant:

“Our colleagues have once again proved their strength in start-ups. We share in everyone’s delight about the new C-Class “made in Bremen”. Bremen has always stood for team spirit and a wealth of experience, and these particularly come to the fore during start-ups. We can therefore face the future with great confidence.”