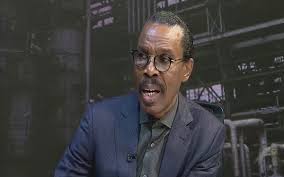 “The issue however is not whether Nigeria has made some achievements and successes, but compared to its potential, Nigeria is still a laggard in many respects,” he said.

Rewane said the nation needs the intellectual depth of academics like Prof Osinbajo and people in public life who have candour like him who can make the private sector feel at ease in the policy-making community.
“We need the intellectual depth of academics like Prof Yemi. We need Godfearing clerics like Professor Oluleke. We need people in public life who have candor like Prof Osinbajo and more than anything else, we need people like him who can make the private sector feel at ease in the policy-making community,” he added.
At the event, Minister of Interior and former Governor of Osun State,  Rauf Aregbesola noted that Nigerians are very industrious but lacked the ability to generate enough output that would boost the country’s economic fortunes.
According to the minister, Nigerians are not in anyway lazy, saying that they go about their jobs with diligence and dedication.
Despite their dedication, the minister lamented that the level of productivity of Nigerians was too low to salvage the country from the grips of poverty.
He made a comparison between a farmer in Nigeria who cultivates a hectare of land and another in China who cultivates the same one hectare of land, saying while that of Nigeria gets less yields despite all factors being in his favour, the Chinese farmer may end up getting better yields at the end of the exercise.
“Do not get me wrong, Nigerians are very hard working and industrious but when you look at the output compared to the efforts they put into their work is very very low, such kind of things cannot navigate the country out of poverty, “he stated.
Aregbesola also extolled the women folk on the occasion of commemorating the international women’s day, insisting that women are much more goal oriented than their male folks.
He said women are less prone to crimes and anti social vices in the society, stressing that during his administration as Osun state governor women appointed into sensitive offices delivered better results.
Osinbajo, who addressed the gathering virtually, commended the organisers for the honour.
The event was attended by Aregbesola; Minister of Works and Housing, Babatunde Fashola; Gov Abdullahi Sule of Nasarawa state; Chairman of Nigerian Governors’ Forum and Ekiti state governor, Kayode Fayemi,
Others are: United Arab Emirates Ambassador to Nigeria, a representative of the Dantata family, Saad Dantata,  former Minister of State for Trade & Investment, Hajia Aisha Abubakar, ex- Sports Minister Solomon Dalung.
Ends….
Previous Article

2023: Why I don’t care if Nigeria’s next President, VP, Speaker are of same religion – Soyinka