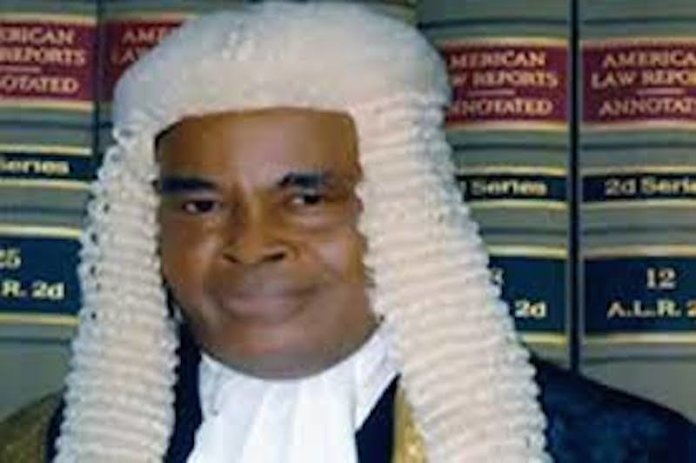 President Muhammadu Buhari has condoled with the family and friends of Justice Sylvester Ngwuta of the Supreme Court, who passed away yesterday in Abuja.

Justice Ngwuta died 23 days to his March 30 retirement on the attainment of the mandatory retirement age of 70 years.
According to a statement from the apex court, the late judge died around 2.30 a.m yesterday.

The statement by the Chief Registrar of the Supreme Court, Mrs. Hadiza Mustapha, said Ngwuta died after a brief illness.
Mustapha, however, stated that the late judge’s sickness was not connected to COVID-19.

“The Supreme Court of Nigeria regrets to announce the death of the Hon. Mr. Justice Nwali Sylvester Ngwuta, JSC, CFR, by 2.30 a.m. of Sunday, March 7, 2021, the apex court said in the statement, explaining: “He felt sick and was admitted in the last one week in the National Hospital, Abuja but before he was moved to the intensive care unit (ICU) of the hospital on Friday, March 5, he tested negative to COVID-19 investigative test conducted on him.”

Justice Ngwuta was due to retire from the Supreme Court bench on attaining mandatory retirement age of 70 years on March 30, 2021.
His remains, according to the statement, have been deposited at the National Hospital mortuary, pending burial arrangements.

Buhari, in a condolence message by his media aide, Malam Garba Shehu, joined the people and government of Ebonyi State, the Nigeria Bar Association (NBA), and members of the Bench in mourning the legal luminary.

He expressed regrets that the death of the jurist will leave a gap in the Supreme Court, considering his experience and dedication to the interpretation of the constitution.

Justice Ngwuta, who was appointed Supreme Court justice on March 22, 2011, was born on March 30, 1951, in Amofia-Ukawu, Onicha Local Government Area of Ebonyi State.
He read law at the University of Ife (now Obafemi Awolowo University) lle-Ife and graduated in 1977, bagging his BL at the Nigerian Law School in 1978.

The late judge, who was among some judicial officers subjected to corruption trial in the early days of the Buhari administration, resumed normal judicial duties on September 23, 2019, at a ceremony marking the Supreme Court’s 2019/2020 new legal year.

Ngwuta, who was the third most senior judge of the Supreme Court until his death, was suspended from judicial duties in 2016 by the National Judicial Council (NJC) like other judicial officers, whose houses were raided in August 2016 by the Department of State Services (DSS).

He was subsequently charged before the Federal High Court, Abuja with money laundering and later, before the Code of Conduct Tribunal (CCT) with failure to declare assets.

Both charges were subsequently struck out in 2018 on account of a decision by the Court of Appeal, Lagos Division that an erring serving judicial officer must first be taken through NJC’s disciplinary mechanism before being subjected to trial in the conventional courts.

CBN to Scale up Economic Support with Extra N1.1tn