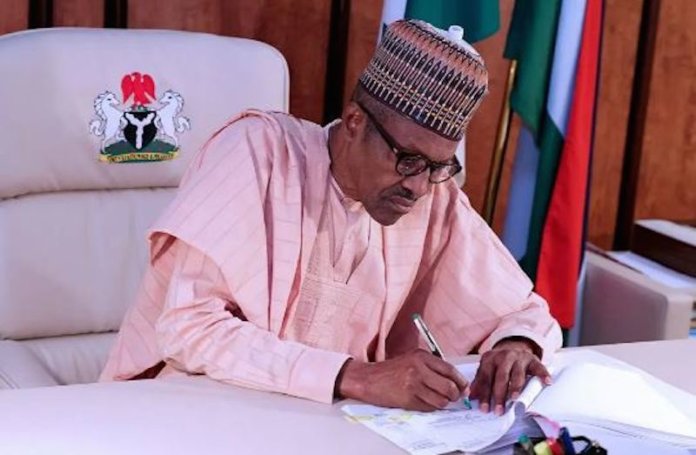 President Muhammadu Buhari yesterday raised the tempo in the efforts by his administration to tame the worsening insecurity in the country as he directed the Nigeria Immigration Service (NIS) to increase surveillance at the nation’s borders.
The president, in his speech in Abuja during the virtual inauguration of the NIS Technology Building, stressed the urgent need to improve security around the nation’s borders so that criminals won’t find Nigeria a safe haven to hide and perpetrate their criminalities.

He also charged the nation’s security agencies to improve their drive towards the protection of lives and property.
Also yesterday, the Niger State Government expressed optimism of an imminent reduction in abductions and banditry following a meeting, in a forest in Shiroro Local Government Area of the state, of commanders of bandits operating in Niger, Kaduna and Zamfara States.
The meeting came on the heels of the abduction of 13 persons at Erena in the Munya Local Government Area of the state on Wednesday.

Besides, the North-East Governors’ Forum rose from their fourth meeting, which held in Bauchi, and adopted community policing and the setting up of local security outfits to tackle the security challenges in the zone.
And following the violence that erupted in Jangebe community during the reunion of the freed 279 schoolgirls with their parents on Wednesday, the Zamfara State Government has imposed a dusk-to-dawn curfew on the community to prevent any further breach of the peace.

Yesterday’s directive by Buhari is the third this week to deal with the security crisis confronting the nation, leading to abductions, banditry and insurgency.
The president had on Tuesday declared Zamfara State, the epicentre of banditry in the North-west, a no-fly zone and banned mining activities in the state.
Buhari, through one of his spokesmen, Mallam Garba Shehu, also on Wednesday, ordered security agencies to shoot on sight bearers of illegal weapons such as AK-47.

The president, in his speech, instructed all security agencies to raise their performances in protecting lives and property, with a mandate that the country’s Global Security Index must be improved.
He said: “It is imperative that our ranking in the Global Security Index improves and I am using this medium to call on all security agencies to step up their activities towards achieving this goal. I assure you that the administration will give the much needed support to you in your operations.”

Buhari urged the NIS to collaborate with international security organisations such as INTERPOL in safeguarding the borders.
He added: “As a security agency, I charge you to be relentless in carrying out your statutory duties of keeping our borders safe while you ensure that criminal elements don’t find Nigeria as a safe haven to hide and perpetrate their criminality.

“I urge you to actively collaborate with international security organisations like the INTERPOL, in safeguarding our borders. Remember that a safe border is a prerequisite for a safe nation. You must develop strong working relationships and ties with the international community and friendly nations as it relates to migration management; adopt and implement workable strategies from them while also sharing your best practices.
“Frontline workers and operators should remember that they are our windows to the world. They must show the best face of Nigeria at all times.’’

He commended the Minister of Interior, Mr. Rauf Aregbesola, for consistently pushing for the completion of the Technology Building, which will serve as the command and control centre of the NIS as well as the repository of personal data of Nigerians and expatriates resident in Nigeria.
Aregbesola, in his speech, said the security challenges facing the country were temporary and surmountable, adding that the “weakest link’’ has been the land borders and the Technology Building will play a pivotal role in the control of illegal migration.

Aregbesola stated that the visa-on-arrival policy of the federal government ensures proper documentation of all entrants whose biodata are shared with international security structures to ensure tight surveillance and compliance.
He announced a review of the stay period from 90 days to 30 days.

According to him, 50 per cent of all immigration personnel will now work at the nation’s borders for optimal productivity.
In his remarks, the Comptroller General of NIS, Muhammed Babandede, said the Technology Building was the best project the service had ever initiated and completed since it was established in 1958.

The Secretary to the Niger State Government, Alhaji Ahmed Ibrahim Matane, yesterday expressed optimism of an imminent reduction in abductions and banditry following a meeting of bandit commanders in a forest in the state.
However, Matane told journalists in Minna, that the state government did not participate in the meeting because it was for bandits alone.

“The meeting was summoned by the commander of a bandit group resident in Niger State and he invited other commanders from outside the state too for the meeting on how to restore peace to the state.
“The state government was not represented at the meeting because we realised that the meeting was purely for bandits from other locations to talk to each other on how to have permanent peace in this state.
“However, we have agreed that we will interface with them again to see where we can come in towards having a lasting peace in the state.

“I have always said that security is like stick and carrot and that the state government will be willing to stretch its hands of friendship to those of them who are willing to be in the mainstream and eventually see reason why they should not carry arms but rather pursue a legitimate means of livelihood,” Matane said.

However, despite the talks, abduction hasn’t reduced in the state as bandits kidnapped 13 people from three families in Erena town in the Shiroro LGA of the state on Wednesday night.
The bandits, who were said to have beaten the security arrangements put in place by the military in the town, stormed the houses of three prominent people in the community and kidnapped the residents at about 11p.m in what was described as “a very quiet operation.”

Two heads of the families, their children and wives were taken into custody by the gun-wielding bandits, who rode on motorcycles to carry out the operation while the head of the third family mysteriously escaped abduction after opening the gates of his house for the bandits to enter.
The bandits, according to sources, are demanding a N100 million ransom for their victims.
But it was learnt that family members negotiated that N500,000 should be accepted by the bandits.

The North-East Governors’ Forum has adopted community policing and the setting up of a zonal security outfitpppp to tackle the security challenges in the zone.
In a 10-point communiqué issued after their meeting held on Wednesday in Bauchi, which was read yesterday by the Deputy Chairman of the forum and Adamawa State Governor, Mr. Umaru Fintiri, the forum stated that while it appreciated the reinforced efforts in the fight against insurgency and other forms of criminalities in the region, “it strongly feels the need for community policing and sub-regional security outfit to compliment the efforts of the military and other federal security agencies in addressing these challenges.”

The communiqué said the forum deliberated on the Mambilla Hydroelectric Power project and noted that the project only exists on paper as it has not commenced.
The governors also resolved to form the North East Council on Education, with the mandate to improve quality and performance of students, set up peer review and collate data to drive decision-making on education including performance, admissions, regulatory framework, human resource management, and digitalisation, among others.

The council is to be chaired by the Bauchi State Commissioner for Education, Dr. Aliyu Tilde.
The forum said it was worried that the zone remained short-changed in capital appropriation in the 2021 budget and stressed the need to make an adequate allocation for capital projects for the sub-zone in the build-up to the supplementary budget.

“The forum, after meeting with the British High Commissioner in Nigeria, resolved to work with the UK Government in all the areas beneficial to the sub-region without compromising the sovereignty of the Federal Republic of Nigeria,” the communiqué added.

The governors also noted with dismay what they described as the scourge of substance abuse in the sub-region and resolved to collaborate with the Substance Abuse Research Team (SART), through the secretaries of the various state governments to fight the scourge.
The forum said it considered the prospect for oil exploration in the region and resolved to have specialised institutions to provide the required local content in the oil and gas industry.

Following the violence that erupted in Jangebe community on Wednesday, the Zamfara State Government has imposed a dusk-to-dawn curfew on the community to prevent any further breach of the peace.
The Commissioner for Information, Mr. Sulaiman Tunau Anka, in a statement yesterday, said the curfew commenced on Wednesday.
One person was killed while others were injured when violence erupted in the community on Wednesday when a mob invaded the venue of the reunion of the freed 279 pupils of Government Girls Secondary School, Jangebe at the school premises.

Anka said: “Sequel to an unfortunate civil disobedience which took place at Jangebe town after the return of the released abducted school children, the Zamfara State Government has approved the imposition of a dusk-to-dawn curfew on Jangebe town starting from Wednesday, 3/3/2021. This is to prevent any further breach of peace.

FG: No COVID-19 Vaccine for States without Cold Stores’ Security