Dangote: Nigeria to Save $2.5bn Annually from Petrochemical, Fertiliser Plants 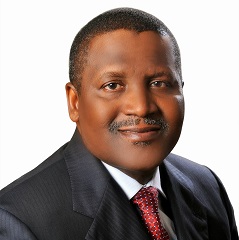 The President of Dangote Group, Alhaji Aliko Dangote, has said that the Nigerian economy will be boosted by over $2.5 billion annually through foreign exchange savings and exports from the group’s petrochemical and fertiliser plants.

The figure is a fraction of the over $9 billion estimated to be saved for Nigeria annually from the Dangote refinery, petrochemical, and fertiliser plants by way of reduction in foreign exchange spending and other import-related costs.

Dangote spoke at the weekend while leading the Governor of the Central Bank of Nigeria (CBN), Mr. Godwin Emefiele, and some business captains on an inspection tour of his multi-billion dollar construction site in Lagos.
Dangote told journalists after the facility tour that the import substitution policy of the CBN made the investments the group was making on the projects possible.

Dangote who stressed the need for Nigeria to be more focused on finding a substitution for oil, which he said was losing its attractiveness, however, jocularly said he had never seen crude oil in his life despite building a 650,000 barrels per day refinery.

He added that import substitution was the only way to develop the country’s economy and address youth unemployment.
“We need to find a substitution for oil and I think, the petrochemical we have, in terms of boosting our foreign reserves, in terms of reducing our outflow of foreign exchange.

“Both the petrochemical and the fertiliser, if you look at that one alone, it will bring over $2.5 billion in, without the petroleum products, without what we are going to save in terms of the imports, in terms of demurrage,” Dangote said.
According to him, when the refinery becomes operational, all the ships transporting petroleum products to Nigeria will be out of business.

He said the group would help to monetise Nigeria’s gas that is currently being flared by taking 110 million standard cubic feet of gas worth over $1.2 billion, to power the petrochemical plant.

He thanked the CBN governor for introducing and driving the import substitution policy, saying that “it is a very good policy, I think you should continue with that. I think your foreign exchange should actually be focused on what you are doing.”

He advised Emefiele to always support those keying into the import substitution policy while refusing to support those that set up industries and come back to ask for foreign exchange to import raw materials.

Acknowledging the investments he and his team had put in to ensure that Nigeria reduces its penchant for importation, Dangote encouraged other business people to look inwards and attract investments to the country.
Dangote stated that if the projects he was carrying out now had been mentioned to him 10 years ago, he would not have accepted to embark on them.

According to him, they had tried to buy the national refineries but could not succeed and they are now building one that is bigger than those refineries combined.

Soludo Alleges Plots to Kidnap His Children during Consolidation