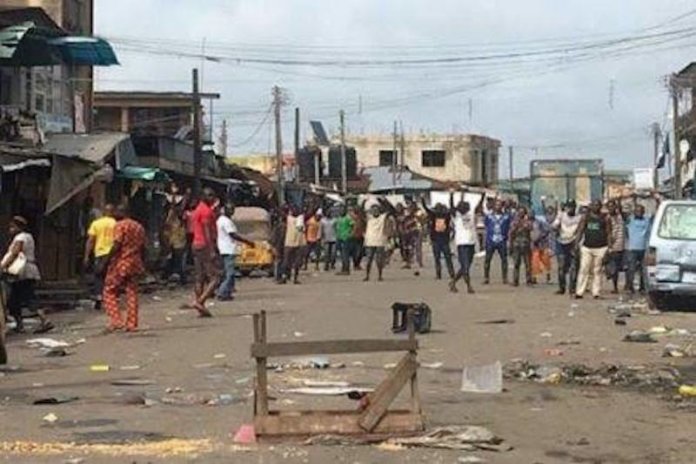 Three persons were feared dead at Shasa Market and environs in Akinyele Local Government Area of Oyo State as violent clash ensued between Yoruba and some Hausa traders in the early hours of yesterday.

THISDAY learnt that the Yoruba were said to have reacted to the death of a cobbler who was reported to have been attacked with dangerous weapon by an Hausa trader in the market on Thursday.

It was gathered that the cobbler (name not known) was said to have attempted to mediate during a disagreement between a pregnant woman and an Hausa man in the market but the enraged Hausa man stabbed the cobbler who tried to curtail him from getting violent with the pregnant woman.

However, a fight broke out yesterday when information filtered in that the injured cobbler had died while receiving treatment at the hospital as a result of the complications that arose from the injury that he sustained on Thursday.
It was gathered that no fewer than two people have been killed in the reprisal attack.

A source in the market, who spoke on the condition of anonymity, said “The trouble took its roots from a fight that broke out yesterday when an Hausa trader who was pulling a wheel barrow engaged in heated argument with a pregnant woman.

“Both the Hausa man and the aggrieved woman had disagreed on the amount which she should pay for wheeling her wares from the market to the roadside for her. But for the prompt intervention of security operatives, the matter would have degenerated in the market on Thursday as the cobbler collapsed after being hit by the Hausa man. However, some people took to the street when the news of the cobbler’s death was broken.”

The state Police Public Relations Officer (PPRO), CSP Olugbenga Fadeyi, while confirming the incident, said it was a clash between two social miscreants in which one of the miscreant, Adeola Sakirundeen ‘m’ was hit by the other and died later while receiving treatment in a hospital.

He disclosed that the state Commissioner of Police, Mrs. Ngozi Onadeko and Special Adviser on Security Matters to Governor Seyi Makinde, Mr. Fatai Owoseni, and other Police Tactical teams, had visited the scene for on the spot assessment.

According to him, “Massive Police deployment and that of the sister security agencies were made to douse tension. Critical stakeholders have also been consulted to appeal to the people. Normalcy is gradually returning to the area.”

Ganduje: 2023 Presidency Must Be Zoned to the South

NIDCOM and the Dillemas of Our Diaspora