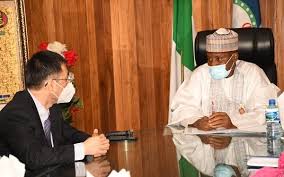 The trade volume between China and Nigeria reached $19.27 billion in 2019, the Charge’ d’ Affairs of the Chinese Embassy in Nigeria, Mr. Zhao Yong said on Tuesday.

Also, despite the pandemic, bilateral trade growth between both countries from January to October 2020 increased by  0.7%.

Yong who was excited about the increase in trade volume between the two countries said the increase is 1900 times that of 1971 when the diplomatic relationship was established.

Speaking at the opening session of the Forum of Nigeria and China @ 50: Reflections and way forward”, Yong said Nigeria ranks first among China’s top 40 trading partners in the world.

“Over the past 50 years, the mutually beneficial China-Nigeria economic and trade relations have enjoyed a robust development, the scales and areas of cooperation continuously expand, and the modes of cooperation have been diversified.

“In 2019, the trade volume between China and Nigeria reached 19.27 billion U.S dollars, which was 1900 times that of 1971 when the diplomatic relationship was established.

Meanwhile, the number of Nigerian students studying in china rose to 6,800 in 2019, which stands first in all African countries.

Also, Mr. Charles Onunaiju, Director, Centre for China Studies (CCS) urged NIgeria to tap into the huge Chinese market which is about $22 trillion.

“A market volume of about 22 trillion U.S dollars is no joke and should not escape the attention of policymakers.

“If Nigeria addresses her infrastructure challenge, especially power and transport networks, which can be achieved through robust engagement with the belt and road mechanism, seize the opportunities of her potential as the next industrial frontier through mainstreaming with China the industrial and production capacity cooperation, then she is well and on the way to exploring the huge Chinese market, not with primary products or commodities but by solid medium industrial products to be modest.”

Gowon who was the first Nigeria leader to have visited China said his memory of his first visit in 1974 was very different from the subsequent visits to China 20 years later.

Foreign exchange inflow drops to $5.7bn in one month