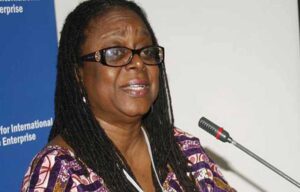 The President, Lagos Chamber of Commerce and Industry (LCCI), Mrs Toki Mabogunje, has projected that the Nigerian economy would end the year in a negative growth territory within the region of minus two per cent.Mabogunje said this at the LCCI’s 132nd Annual General Meeting (AGM) on Thursday in Lagos.

She said that inflation rate was expected to sustain its upward trend in the short to medium term.

“Real Gross Domestic Product (GDP) growth contracted by 3.62 per cent in the third quarter and this marks the second consecutive decline in national output after a 6.1 per cent contraction in the second quarter.

“GDP growth is usually robust in the fourth quarter due to festive-related spending, however, deterioration in consumer’s purchasing power coupled with the disruptive impact of EndSARS protest will most likely dampen recovery prospects in Q4-2020.

“Additionally, the second wave of the pandemic, weakening oil prices and production, and persisting FX pressures are major downside risks to the country’s recovery prospects,” she said.

The LCCI president said there was the need to promote growth-enhancing and confidence-building policies to encourage private capital flows for faster economic recovery.

She said that the medium term recovery plan should be focused on developing physical and soft infrastructure, business-friendly regulatory policies, economic diversification and employment generation.

On the deregulation of the petroleum downstream sector, Mabogunje said the policy was in the best interest of the economy, as subsidy had for long constituted a burden on Nigeria’s public finances.

“While the deregulation of the downstream sector triggered an increase in the price of goods and services, it remains the most sustainable policy option to attract, retain and sustain private investments in the downstream oil sector,” she said.

Mabogunje said that the Lagos Chamber of Commerce International Arbitration Centre (LACIAC) performed extraordinarily in spite of the negative impact of the COVID-19 pandemic.

She said that the LACIAC Board was being restructured to include new members who are non-Nigerian Africans, with new services being introduced such as online dispute resolution services amongst others.

“LACIAC has been nominated for the prestigious African Arbitration Association Awards under the category of African Institution of the Year.

“Considering its very young status, we are very proud of LACIAC’s impressive performance,” she said.

The LCCI President said that the Chamber had refreshed its brand logo to avoid becoming a relic, and allow the organisation to highlight its unique position in the marketplace, reinforce its value and gain a new perspective for what lies ahead.

“It has become necessary to ensure a strong connection with the new generation of entrepreneurs and the contemporary business community without losing the cherished values of our history and heritage as the oldest Chamber of Commerce in West Africa and the second oldest in Africa.

“We believe the move will strengthen the LCCI brand essence as it brings a new perception to its corporate image and visibility,” she said. (NAN)

FG declares 2021 to 2030 Decade of Gas Development for Nigeria