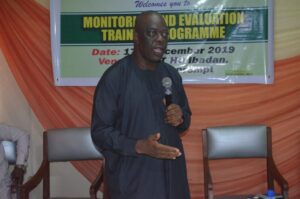 Federal Government has set processes in motion that are targeted at streamlining functions of professional bodies in the country, especially in those groups where there are similar or overlapping roles.

Charles Obaseki, Chairman, Governing Council of The Nigerian Institute of Science Laboratory Technology (NISLT) who disclosed this at a two-day A 2-day stakeholders and Extra ordinary Annual General Meeting of the institute Tuesday in Ede, Osun  State, says the National Council of Establishments (NCE) is already in dialogue with concerned professional bodies to effect harmony in their professional duties.

“Federal Government is looking at all professional bodies in the country with a view to fish out arears where they have overlapping functions, make them more effective, and advance t”he welfare for members of those professional bodies”, Obaseki stated.

According to him, part of the objectives of the stakeholders meeting is for them to address arears of functional overlap, look at where the institutes is presently, and device more ways of contributing more effectively to the nation’s economy.

“We want to contribute more into the society and the growth of the economy, address quackery by effectively monitoring and regulation of those operating relevant laboratories and the professionals in the country”, Obaseki further disclosed.

Obaseki advocates for more funding of the institute, saying that this will enable it offer more regulatory functions which will in turn enhance more economic growth and quality of service delivery in the country.

In his welcome address at the occasion, Gbndegesin Yemi Hezekiah, the Director General/CEO of NISLT says the institute is now more determined to implement its mandate to a logical conclusion and also strengthen the existing laboratories in the system in terms of quality of equipments and professional upgrade.

In her goodwill message at the occasion, Morounfola AWONUGA Vice-Chairman Osun State Chapter of ASLTON, says she is delighted to be at NISLT stakeholders meeting to deliberate on the way forward for the sector.

Awonuga who represented the Osun State Chairman of ASLTON, Comrade Adeyosoye, acknowledged the decision of NISLT to chose the state to host the meeting, saying that “It is not a mistake picking Osun State as the venue of this very important stakeholders meeting because Osun State is the State of the virtues.

She urged discussant to ensure that teething problems bedeviling the Science Laboratory Technology profession will be comprehensively looked into and solutions proffered.

“We at Osun State will expect this gathering to urgently look at solving the following under listed challenges: Advancement of Science Laboratory Technology Professionals beyond CONTISS 13 that is Chief Technologist (CONTISS 13 up to CONTISS 15, Directorate Carder.

“Dropping the nomenclature Technologist for Scientist for all registered and licensed professional members for the carder of scientist (reference to MLS), inspection of schools, post-secondary schools, research institutes and industries; flushing out of quarks in our laboratories all over the country, and finally, introduction of master’s degree and PhD in SLT,” She stressed.