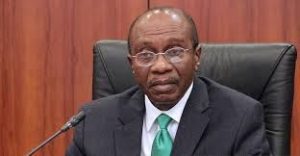 The Central Bank of Nigeria (CBN) has labeled the foreign exchange parallel market as tainted and a channel for bribery and corruption.
CBN governor Godwin Emefiele took a swipe at analysts who ascribe parallel market figures as the country’s exchange rate.
Emefiele stated this at the post Monetary Policy Committee (MPC) meeting briefing in Abuja on Tuesday.
According to Emefiele, “for the information of everybody parallel market as far as we know is a shallow market in Nigeria with no more than five percent of market share. Parallel market, and quote me, is a tainted market in Nigeria where people who desire to deal in illegal foreign exchange transactions including sorting of fx cash for purposes of offering bribes, corruption that is the deal”.
He described as very unfortunate, remarks by analysts who say the exchange rate is ₦480/$. “The parallel market is a market where people who don’t want to provide documentation to support their transactions deal in and it cannot be the basis to determine the value of our currency everybody knows and its accepted that the forex market which is predominantly the I and E window is the market that should be used to determine the exchange of our Naira”
According to him, as far as the CBN is concerned “today net fx ranges between 380/386/387 and we have been very open about the market price determination factors in that market”.
The CBN he said “has no hand in that price determination in that market. The exchange rate is determined by forces of demand and supply in the fx market we don’t agree that determining factor for exchange rate in Nigeria for our currency should be based on a market that is tainted and where people go to pay any bribe. We are not going to be party to that and we will continue to say this to anyone body who cares to listen”.
Commenting on the recession the CBN governor said the bank will be increasing it’s COVID-19 intervention to ₦300 billion to accommodate more Nigerians.
In his words,  “we have been adviced by the MPC that given that this has been very impactful positively that the CBN should do more, we put 50 billion on the table we have so far disbursed over ₦149 billion to 317 thousand beneficiaries and we have been told that we have to increase it not just from ₦149 that it is now but to increase to almost about ₦250-₦300 billion”.
This he said is “to accommodate more people that have not accessed this facilities but we do insist that this must be done in a way that it goes round because we found out that some zones are more represented than others”.
Speaking on when the country will exit recession, Emefiele said “we are hopeful and the minister of finance had addressed some gathering yesterday where she said that she is hopeful that during the Q1 of 2021 we will exit recession. Based on data available to the MPC from the CBN we are somewhat optimistic that indeed if we continue doing what we are doing and do more there is a likelihood that we will see some little positive numbers during the Q4 of 2020 but I can say with some level of certainty as well that we are so certain that during the Q1 of 2021 we will exit the recession”.
This optimism is fueled by the “actions taken by the monetary and fiscal authorities, NBS numbers show that 18 sectors during the Q3 recorded growth during the Q2 and these growth were recorded mainly from the agricultural sector, industry, manufacturing indeed we saw even services doing somewhat slightly but at least agriculture coming up also means what we can achieve from agriculture from whatever we are doing to stimulate agriculture and manufacturing will create job for our people and also stimulate spending, increase output and ultimately lead to moderation in the level of inflation in our country”.
At the end of the meeting for year 2020, the Committee decided by a unanimous vote to retain all parameters by retaining the Monetary Policy Rate (MPR) at 11.5 percent; the asymmetric corridor of +100/-700 basis points around the MPR; the Cash Reserve Ratio (CRR) at 27.5 per cent; and the Liquidity Ratio at 30 per cent.
The CBN governor stated that aggregate domestic credit grew by 7.61 percent in October 2020 compared with 7.35 percent in the previous month, as a result of the CBN’s policy on Loan-to-Deposit Ratio (LDR), supported by the Bank’s interventions in the various sectors of the economy.
As a result, “total gross credit by the banking industry stood at ₦19.54 trillion as at 13th November 2020 compared with ₦19.33 trillion at end-August 2020, an increase of ₦290.13 billion”.
When compared with ₦15.56 trillion at the commencement of the LDR policy in May 2019, total gross credit increased by ₦3.97 trillion. These loans Emefiele said “were granted mainly to manufacturing (₦738 billion), General Commerce (₦874 billion), Agric and Forestry (₦301 billion), Construction (₦291 billion) and ICT (₦231 billion).
In the near future, the CBN governor noted that, available data and forecasts for domestic economy shows that key macroeconomic variables “suggest optimism in output growth in the fourth quarter of 2020, due to the positive outlook for most economic activities.  Accordingly, the economy is expected to recover from recession by the end of 2020, while inflation is projected to moderate by the first quarter of 2021”.
Previous Article