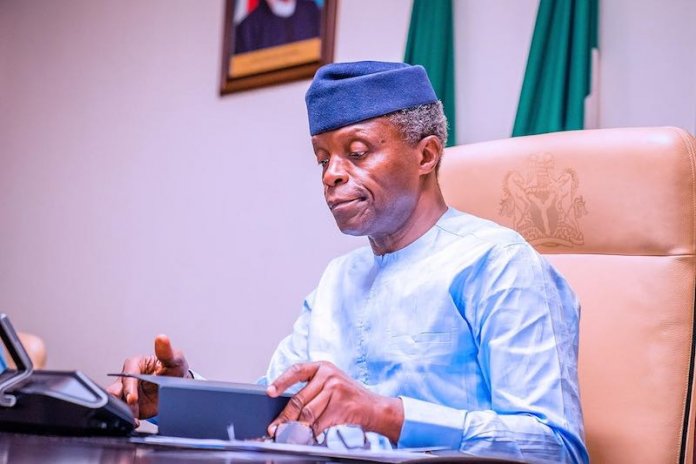 Vice President Yemi Osinbajo yesterday said Nigerians are willing to pay for electricity only if the services they receive from the distribution companies are constant and better.

Speaking during a webinar on “Economic Sustainability Beyond COVID-19,” organised by Emmanuel Chapel, the vice president said it is not true that Nigerians do not want to pay more for power but that they have been unhappy with the poor service over the years.

Reacting to a question posed by the former Emir of Kano, His Royal Highness, Muhammad Sanusi II, the vice president said, “Just to comment on the point you made and I have alluded to it that income elasticity is more important for persons living in the rural area and for the poor who need to have electricity for whatever means of livelihood they have.

“What we have discovered especially as we have worked with private sector to deploy solar power in different parts of the country is exactly the point you have made.

“For example, in Wuna, a village which is just outside Abuja, they never had light until a private company provided solar power there; what they pay on average for their power is well in excess of the N37 per unit that we pay for power of the grid.

“There is no question at all and Turankawa in Sokoto pay almost N100; so, from many of the areas where we have been it is evident that this business of people not willing to pay for power is not true at all; as a matter of fact the reason why there is such great resistance is really the service level.

“Most people are used to poor service; so, they just see every tariff increase as injustice because they are getting poor service but are asked to pay more but where service is guaranteed people have been prepared to pay.

“This we have seen in Sabon Gari market in Kano; we have seen this in Ariaria market (in Aba) and in Sura market (in Lagos) and in so many different parts of the country. So, I do think the question really is one of service; there must be a way of guaranteeing service in exchange for tariff increase, which is really the point we have made with the Discos and in truth the Discos are negotiating already with several of their clusters; the easiest of course are with industries but there isn’t much negotiations anyway because they are already some sort of cost effective tariff for the preferential treatment that they get.”

Asked what is more important to the government, power for the industries or power for homes, Osinbajo said, “I doubt if we have the luxury of choosing between both options. “We need to do both as much as we can. The market failure in the power sector is mostly due to how the privatisation was done, as we now have a market that is so problematic due to not allowing market forces to determine price.

“We need to get to the market-based system in which the NERC would only serve as a regulator and not a determinant of the cost price of power. In March of 2020 the Discos were mandated to go to the customers and negotiate based on service, this will help remove the subsidy regime that the government is bearing.”

Osinbajo added that, “the entire grid currently leaves out about 60 million persons who do not have power and this is one of the reasons why the Economic Sustainability Plan has adopted renewable energy for the rural people by encouraging the private sector to install micro grids.

“It has already been done in Sabon Gari and Ariaria markets where power is paid for by store owners. In these two markets, the people are willing to even pay higher for the better services they are receiving. We have a target of 25 million homes for the micro grid across the country.

FG Not in a Hurry to Resume Train Operations, Says Amaechi

David-Chyddy Eleke scrutinises the electoral prospects of aspirants se…
May 11, 2021

Oyo State Governor Seyi Makinde has said he will comply with the Supre…
May 11, 2021

The Lagos State Government has resolved to ban the use of motorcycles …
May 11, 2021

GUNMEN in the early hours of Monday reportedly abducted Muslim worship…
May 11, 2021

Last week’s suspension of Managing Director of the Nigerian Ports Auth…
May 11, 2021

The Nigerian stock market closed on a positive note on Monday for the …
May 11, 2021

The Securities and Exchange Commission has said capital market operato…
May 11, 2021

Heritage Bank Plc has said for being part of private sector collaborat…
May 11, 2021

The Federal Government on Monday inaugurated a panel of enquiry on the…
May 10, 2021

A former chairman of the Ekiti State chapter of the Peoples Democratic…
May 10, 2021

For 74 Deregistered Political Parties, the Battle …