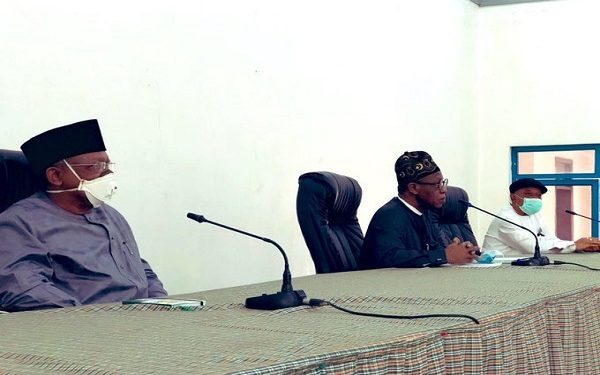 A princely sum of N13.642 billion has been released to pay hazard allowances and group life insurance to health workers and federal civil servants, the Federal Government announced on Sunday.

The announcement came on a day the National Association of Resident Doctors (NARD) said it was suspending its one-week-old strike for four weeks to give the government more time to meet its demands.

But the government said it has resolved all the issues raised in the doctors’ 14-day strike.

It described the “inexplicable strike as a dangerous setback for the nation’s efforts at tackling the Coronavirus pandemic.”

Besides the resolution of the issues, the government also unveiled juicy packages for frontline health workers in the battle against COVID-19.

They trio said the Federal Government had trained over 33,000 workers on how to manage COVID-19.

Mohammed said: “It is pertinent to say that the issues raised by the Association, while issuing its ultimatum on June 1st have received or are receiving full attention.

“Personal Protective Equipment (or PPE) have been supplied to all state and federal tertiary hospitals and funds for the same have been provided in the revised 2020 budget.

“Implementation of the Residency Training programme was backed by the National Assembly, which provided N4 billion in the revised 2020 Budget, while the ministry of Health is working with the National Salaries, Incomes and Wages Commission (NSIWC) to build a template to assure same in the personnel cost of next year’s budget.

“We have also paid N9 billion as premium for Group Life Insurance to all our health workers and N4,642,485,146.00 as Special Hazard Allowance to health workers as already acknowledged in at least 35 hospitals.

“Please note that the payment of COVID-19 Special Hazard Inducement allowances are based on the following four templates:

“In summary, a total of 55,031 health workers in 35 COVID-19 designated hospitals and medical centres have been paid special hazard allowance totaling N4, 642,485,146.00 as of today (yesterday) and more payments are being processed.

“Other matters relating to non-payment of arrears dating as far back as 2014 or salaries owed by state governments, are either in court, or beyond the power of the Federal Ministry of Health to resolve.

“Gentlemen, despite the payment of the hazard allowance and the group life insurance, the provision of PPE as well as addressing other issues raised by the resident doctors, they still opted to proceed on strike.

“This is happening at a time the nation is battling a pandemic of immense proportions. This inexplicable strike is a dangerous setback for the nation’s efforts at tackling the pandemic.”

He explained in details what the government has done to protect health workers in the frontline against COVID-19 pandemic.

Dr. Ngige, said the “N9 billion released for Group Life Insurance is not only for health workers, it will cover all Federal Civil servants. The Pension Commission (PENCOM) Act makes provision for Group Life insurance for all workers in the Federal Public Service. Even federal civil servants within that frame, their families can make claim once there is fatality.”

“But the health workers in the frontline are covered, they also have covers for extra toplife insurance from the Presidential Task Force (PTF) from the donations given to PTF by some insurance companies and other benefits in the Compensation Act.

Dr. Ehanire pleaded with doctors to put the nation’s above personal interest, noting that the government provided for “public health emergency”, despite Nigeria not being a manufacturing country.

“All doctors and nurses nationwide will be protected,” he added.

“We are also aware of the challenges confronting health workers in carrying out their duties, especially the provision of the PPE.

“But I make bold to say that the Federal Government has done everything possible to procure PPE and make such available to our health workers. Of course, the fact that this is a global pandemic has affected the availability of PPEs and other requirements for fighting the pandemic. Not even the developed countries have been able to procure all that they require, such as PPEs and ventilators.

“But Nigeria has prioritised this and has also succeeded in procuring as many PPEs as possible for distribution to our health workers, and we now have a stockpile for emergency situation.”

According to him, the Federal Government has increased COVID-19 test laboratories in the country to 38, adding that 13,000 health workers had sharpen their skills on Infection, Prevention and Control (IPC).

Mohammed said: “Apart from the provision of PPEs and other equipment, the Federal Government has done the following:

He said all the measures were taken by the government to strengthen the nation’s capacity to respond to the pandemic, protect the healthcare workers and to avert the strike.

On why the government opted for negotiation with the doctors and other health workers, Mohammed said it was done in the overall interest of Nigerians,

He said: “Many options are open to the Federal Government in tackling the strike, yet it has chosen negotiation over confrontation, as you can see in the efforts we have made so far. The government has bent over backwards to meet the demands of the striking doctors.

“We must express the government’s consternation that resident doctors will choose a time like this, when we are battling a pandemic, to embark on a strike. This negates what obtains in other parts of the world, where health workers are rallying around their governments to tackle the COVID-19 pandemic.

“Nigeria must be among, if not the only nation, where doctors – who are classified as essential workers – have opted for a strike during a public health emergency.

“Currently, only essential and skeletal service is being rendered in the nation’s public hospitals. There is no doubt that the strike has impacted negatively on public health, putting many lives – including those of their members – at risk.

“This is not right and it clearly negatives the Hippocratic Oath to which the doctors subscribe. While the Federal Government continues to engage the resident doctors in negotiation, we want to use this opportunity to appeal to them to respect their oath and put life above other considerations. This is an ill-timed and ill-considered strike.”