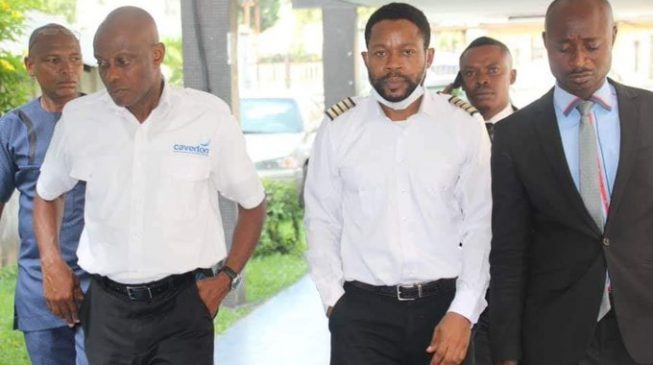 The Federal Government has assured that the two Caverton Helicopter pilots arrested by the Rivers State Government will be released soon.

It also said the pilots were on national assignment when the arrest was made.

The pilots were arrested by the police for flouting the state’s government directive of flying into the Air Force Base in Port Harcourt despite the lockdown order following the spread of COVID-19 in the country.

The Minister of Aviation, Senator Hadi Sirika, also noted that the governor does not need to know about the approval given to Caverton by the federal government.

Speaking at the Presidential Task Force briefing in Abuja on Saturday, Sirika said there was a need to focus on tackling the virus ravaging the country.

He said: “I think coronavirus is a very serious matter of life and death and should not be politicised.

“According to Chapter 2, Section 14 of the Constitution of Nigeria, which states the primary purpose of the government to ensure the security of lives and property, that is why the Task Force on COVID-19 was established by Mr. President. So, it involves the lives of 200 million of all of us and it takes precedence in this case.”

Giving an update on the pilots, he said: “The pilots were carrying out a national assignment because the speech and address by the Secretary to the Government of the Federation (SGF) who is the chairman of the Task Force and the presidential address exempted oil and gas from the lockdown in national interest, and the Caverton Helicopters were flying into a military base for national assignment.

“I may not be learned but I am lettered, and I understand in this case that there is no conflict between a federal and state law. But I will not go into law on this platform because it is unnecessary.

“So, whether His Excellency, the Governor of Rivers State ought to know if the exempted Caverton flight will be landing in a military base in Port Harcourt, he does not need to know.”

On the fate of the pilots, the minister said: “The pilots will soon be released and secured and there will be no conviction hanging on their necks.

“Arising from Constitutional provisions and the powers of Mr. President and the seriousness of this Taskforce and the danger of COVID-19 and the way we operate in civil and military aviation, it is why I said the Air Force officer acted ignorantly once the helicopter landed on its property to have called the governor.

“Also, the federal police who made the arrest within the premises of the military and prosecuted also acted ignorantly, and I said they exhibited incompetently.

“This matter should not be over-flogged because the federal government is very serious and it is here for the 200 million people of Nigeria, whether you are from Rivers, Cross River, Kano, Kaduna regardless.”

Meanwhile, the Peoples Democratic Party (PDP) has called for dialogue between the Federal Government and the Rivers State Government over the arrest and detention of the pilots of helicopters by Rivers.

In a statement issued by the spokesman for the PDP, Kola Ologbondiyan, yesterday, the party asked the Federal Government to avoid acts that would portray it as politicising the fight against COVID-19, just like the face-off has shown.

The party said it was deeply concerned that issues of protocols, which could have been managed through dialogue, was being escalated by the Minister of Aviation, Senator Hadi Sirika to assume a political dimension.

The statement said: “Our party holds that the issue of public health safety should be of major concern to all actors in government irrespective of the offices they occupy.

“We find it strange that the Federal Government would be supporting a private business to disobey the extant order of a state.

“We hold that all decisions and actions of the Rivers State Governor, Nyesom Wilke, so far, rests on ensuring public safety and protecting the people of Rivers State from the scary wrath of COVID-19.

“We therefore call on the Federal Government, particularly the Minister of Aviation, to pursue the path of dialogue and stop politicising COVID-19.

“The PDP considers it imperative to ask the Federal Government to direct Carveton and her passengers to subject themselves to health checks by Rivers State Health Surveillance Officials.

“We also demand that President Muhammadu Buhari should, as a matter of urgency, provide incentives for Rivers State to enable the state perform its responsibility as the oil and gas hub of our nation, particularly at this critical time of COVID-19”.

I was misquoted on state of healthcare system – SGF Mustapha

Lagos floods cause power outage in Lekki, VI, others