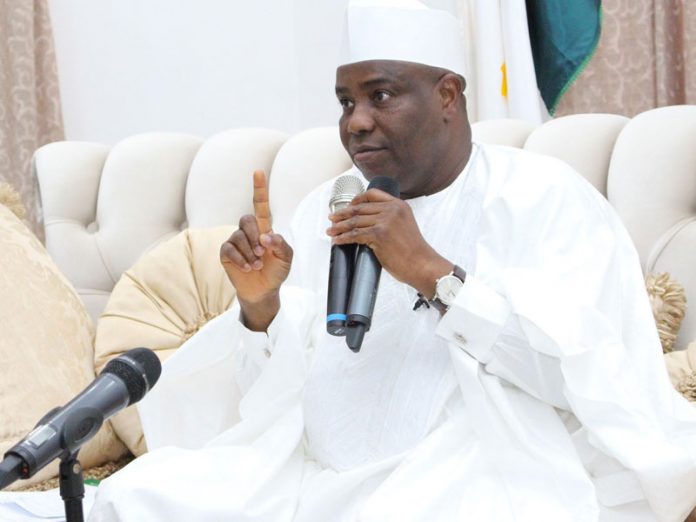 Sokoto State Governor, Alhaji Aminu Tambuwal, has urged the media to remain vigilant and mobilise Nigerians to defend the nation’s democracy, saying the country cannot operate a democracy like a military dictatorship.

Also, former Governor of Ogun State, Olusegun Osoba, tasked the media, civil society groups and other stakeholders in the democratic space to resist the Hate Speech Bill, saying it will amount to tyranny and a breach of fundamental human rights of citizens.

They spoke yesterday in Sokoto during the opening ceremony of the Nigerian Guild of Editors’ Conference.
Tambuwal also rallied the media to defend free speech by mobilising public opinion against the bill.

He said: “The media must remain vigilant. You have a responsibility to educate and mobilise Nigerians to defend this democracy. We cannot operate a democracy like a military dictatorship. The storms are gathering. We must join hands to checkmate anti-democratic elements and return our country to the path of constitutionalism, progress and development.
“The laws are now being obeyed in the breach; freedom of speech, expression and association are under severe threat. Anti-democratic elements are being emboldened by the day.

“The latest move that has shocked Nigerians is the Hate Speech Bill that prescribes death penalty for offenders. This is quite scary and has indeed set people thinking on the true intention of the proponents of the bill.”

According to him, there are enough provisions in the country’s laws to deal with people whose actions can undermine national unity and cohesion, saying such proposed “draconian legislation” has no place in a constitutional democracy.

Tambuwal stated that the editors’ conference could not have come at a better time than now, when Nigeria is striving to find lasting solutions to some of the problems militating against its political, social and economic development.

Explaining the importance of the theme of the conference: “Governance, Society and a Distressed Media”, the governor said it was apt, adding that these are indeed interesting times in Nigeria, as the economy struggles to regain its balance; government at all levels are faced with the challenge of dwindling resources that has made them to be struggling to provide essential services.

On his part, Osoba warned members of the National Assembly against passing any law that will undermine the democratic principles of the nation.

According to him, the proposed Hate Speech Bill violates all-known democratic values, including freedom of expression and the constitutional responsibilities of the mass media.
He urged Nigerians to be ready to confront the lawmakers, by employing all legitimate and legal means to resist the proposed law.

In his keynote address titled: “A Distressed Media: Impact on Government, Governance and Society,” the Editor-in-Chief of Vanguard Newspapers Group, Gbenga Adefaye, explained that under democracy, there is no other choice than constitutional order.

The Provost, Nigerian Institute of Journalism, Gbemiga Ogunleye, also discussed “Journalism Education and Shrinking Opportunities,” with a plea to both the media and educational institutions to be in tune with the model global journalism technology and practice.