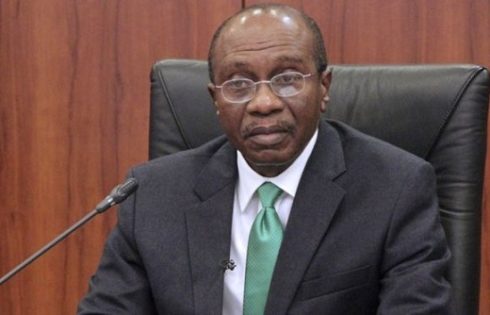 The Central Bank of Nigeria on Friday said it would continue to implement the cashless policy in line with its mandate to ensure an efficient payment system.

He said that contrary to claims in some quarters that many Nigerians would suffer the negative impact of the policy, only about five to 10 per of bank customers would be affected.

For corporate accounts, the apex bank in the circular said that DMBs would charge five per cent processing fees on withdrawals and three processing fee on lodgements of amounts above N3m.

The House of Representatives had on Thursday through a resolution directed the apex bank to suspend the policy.

But responding to the development, Emefiele said if the Nigerian economy was to compete effectively with those of developed countries, a payment system that encourages the use of non-cash channels was desirable.

He said that before the cashless policy was first inaugurated in 2012, a lot of stakeholder engagements were done to sensitise Nigerians on its benefits.

He said the policy was suspended in 2014 to allow more payment channels to be developed by Deposit Money Banks.

The governor said that since the policy was suspended, currency management cost had continued to increase year-on-year at an average annual growth rate of 33 per cent.

However, he said the bank had continued to provide alternative channels, adding that people had embraced it.

Emefiele said, “Since the policy was first launched, currency management costs have continued to increase year-on-year at an average annual growth rate of 33 per cent.

“Notwithstanding, electronic transactions have increased within the economy. We have provided alternative channels and people have embraced it.

“This is a strategic timing of these actions because on Monday, September 23rd, the mutual evaluation by GIABA (Inter-governmental Action Group Against Money Laundering in West Africa) on the country’s anti-money laundry and CFT (Combating Financing of Terrorism) regime will begin.

“Passing the mutual evaluation positions Nigeria as a safe and credible destination for financial transactions across the world.

The apex bank boss said if the CBN did not implement the cashless policy, credit cards owned by Nigerians might not be used abroad.

On the Value Added Tax, he said the MPC supported the decision of the Federal Government to increase the rate from five per cent to 7.5 per cent.

He said with Nigeria having one of the lowest VAT rate in the world, and faced with fiscal challenge, the best way to shore up revenue was to increase tax.

He said, “The MPC endorsed the increase in the VAT rate from five per cent to 7.5 per cent. The government has the responsibility to fend for everybody.

“In fending for everybody means that it has to spend money to provide infrastructure – roads, airports, different things that will improve the lives of its people.

“There are two ways through which government can fund these expenditures. It’s either it raises revenue or goes for debt. You all know that the government has been criticised that the debt stock is too high.

Emefiele said while the decision to increase VAT might be painful to Nigerians, the benefit of such move far outweighed the cost.

On the Monetary Policy Rate, Emefiele said this was left unchanged at 13.5 per cent.

He explained that nine out of the 11 members that attended the meeting unanimously agreed to hold the monetary policy stance.

The governor said apart from the MPR that was retained at 13.5 per cent, the committee decided to hold the Cash Reserves Ratio at 22.5 per cent.

Explaining the rationale for the decision, he said the MPC felt compelled to review the options of whether to tighten, hold or loosen.

FG earns N52.7bn from solid minerals in one year