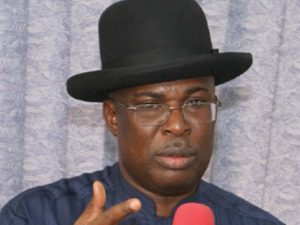 The Minister of State for Petroleum Resources, Timipre Sylva, on Friday outlined the deliverables of his ministry on which the Nigerian National Petroleum Corporation and other departments and agencies under his watch should take a cue.

In a presentation at the commencement of a two-day retreat of the minister for directors of the Federal Ministry of Petroleum Resources and heads of agencies under his purview, Sylva listed the priority areas he would focus on.

They include the implementation of the reduction of Federal Government’s equity stakes in joint venture participation to 40 per cent and curbing petroleum products cross border leakages.

Sylva told heads of the agencies that at end of the retreat, they would be required to collectively sign an undertaken to deliver on the set tasks and targets, adding that they must execute the mandate with all the seriousness it deserved.

The Group Managing Director, NNPC, Mele Kyari, expressed the readiness of corporation to align with the spirit and letter behind the key priorities areas.