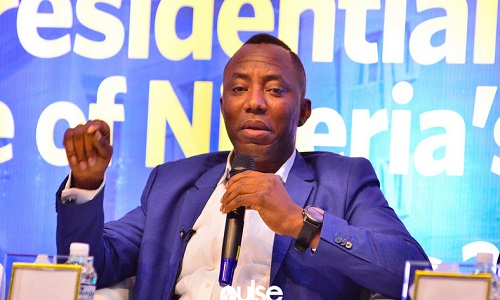 The Federal Government on Friday charged the convener of #RevolutionNow protest,  Omoyele Sowore, with treasonable felony and money laundering.

Sowore, promoter of an online media platform – Sahara Reporters, who was also  presidential candidate of African Action Congress (AAC) in the last presidential election, is charged along with Olawale Bakare, also known as Mandate,  in a seven-count charge filed by the office of the Attornery General of the Federation.

Sowore is currently being detained by the Department of State Services (DSS) upon an order of the Federal High Court, Abuja given on August 8, 2019, permitting  the DSS  to detain him for 45 days in the first instance, following the security agency’s claim that he was involved in acts of terrorism and plotted to topple the government; allegations he has since denied.

The charge filed yesterday was signed on behalf of the Attorney-General of the Federation and Minister of Justice, Abubakar Malami (SAN), by Aminu Alilu, a Chief State Counsel in the Department of Public Prosecutions of the Federal Ministry of Justice.

The two defendants are, in the charge, accused of committing conspiracy to commit treasonable felony in breach of section 516 of the Criminal Code Act by allegedly staging “a revolution campaign on September 5, 2019 aimed at removing the President and Commander-in-Chief of the Armed Forces of the Federal Republic of Nigeria.”

They are also alleged to have  actually committed  the offence of reasonable felony in breach of Section, 4(1)(c) of the Criminal Code Act, by using the platform of Coalition for Revolution, in August 2019 in Abuja, Lagos and other parts of Nigeria, to stagedthe #RevolutionNow protest allegedly aimed at removing the President.

Sowore was, in the charge, accused of involvement in cybercrime offences in violation of section 24(1)(b) of the Cybercrimes (Prohibition, Prevention) Act, by “knowingly” sending “messages by means of press interview granted on Arise Television network, “which you knew to be false, for the purpose of causing insult, enmity, hatred and ill-will on the person of the President of the Federal Republic of Nigeria.”

The state aso accused Sowore of money laundering offences in breach of section 15(1) of the Money Laundering (Prohibition) Act, 2011 by allegedly transferring by means of swift wire various sums of money from his United Bank of Africa Plc account with number 3002246104  into Sahara Reporters Media Foundation’s account with Guaranty Trust Bank in order to conceal the origin of the funds.

Listed as exhibits to be relied upon by the prosection are Sowore’s written statement, transcripts of his statement, video recordings, audio recordings, statements of bank accounts, media publication and “any other exhibits the prosecution may later supply in its additional proof of evidence.”

The prosecution also listed six specific witnesses to be called.

They are Paul Clement, Moses Amadi, Cyril Odawn, Paul Okafor, UBA employee, GTB employee and “any other witness or witnesses to be supplied later in the additional proof of evidence.”

The DSS arrested Sowore in Lagos on August 2, 2019, following his call for revolution in a protest he organised to take place in some major cities on August 5, 2019.

Nigeria will be the leading black nation- President Buhari