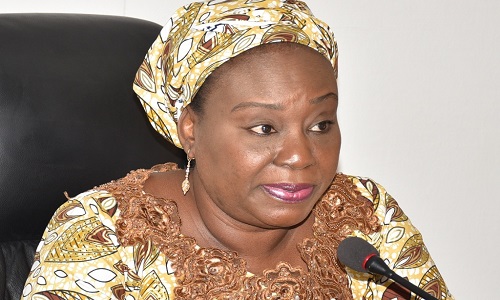 Oyo-Ita was probed by the anti-graft agency over alleged N3billion fraud in her Office.

The President appointed the Permanent Secretary, Ministry of Petroleum Resources, Dr. Folashade  Yemi -Esan as the acting Head of Service.

Although the President described his decision as “Stabilisation of the Federal Civil Service”, there were indications that he wielded the big stick following some damning revelations in the EFCC report.

It was learnt last night that Oyo-Ita may face trial along with three Permanent Secretaries. Five directors have indicated their interest to testify against her.

A statement from the Office of the Secretary to the Government of the Federation said Oyo-Ita will proceed on “indefinite leave” pending the conclusion of investigation by the anti-graft agency.

The statement signed by Willie Bassey said: “President Muhammadu Buhari has approved the appointment of Dr. Folashade Yemi-Esan as the Acting Head of the Civil Service of the Federation with immediate effect.

“Dr. Mrs. Yemi-Esan, who is the Permanent Secretary, Ministry of Petroleum Resources takes over from Mrs. Winifred Ekanem Oyo-Ita, who has been directed to proceed on an indefinite leave to allow conclusion of the investigation being carried out by the Economic and Financial Crimes Commission.

“The President has also approved the extension of the tenure of seven (7) retiring Permanent Secretaries for a period of one calendar year with effect from 1st October, 2019 to ensure stability in the Federal Civil Service and effective delivery on the nine priority areas of the administration as well as the mandates given to the new Ministers.

“The decision of Government to extend the tenure of these Permanent Secretaries is premised on the need to ensure that the new Ministers are properly guided, briefed about their sectors and to ensure that a solid foundation is laid for the delivery on the Presidential Mandate which they jointly signed.

“The Permanent Secretaries will also help the Ministers to manage the process for the preparation of the 2020 Budget in line with the commitment of Government to return to the January-December budget circle and help develop various policies and programmes aimed at lifting 100million Nigerians out of poverty in the next 10 years.

“The action of Mr. President is in exercise of the powers conferred under Section 171 (2) d of the 1999 Constitution of the Federal Republic of Nigeria (as amended).”

It was learnt that the last 48 hours was challenging for Mrs Oyo-Ita who had pleaded with the Presidency to allow her to proceed on voluntary retirement.

“Also, Mrs Oyo-Ita admitted to EFCC detectives that she collected estacodes for trips she never made. The cash was never returned to the coffers of the government in line with the extant rules in the Civil Service.

“The fact that an officer in OHCSF was found with N600million in his personal account was rated as absurd and unpardonable by the Presidency.”

A source added: “She had been battling in the last 24 hours to avert her removal but the Presidency insisted that the law must take its course”.

Investigation by our correspondent last night revealed that the Head of Service might face trial.

“We have enough evidence to out her on trial any moment from now. We have Permanent Secretaries and directors in the civil service, who have given credible testimonies. They have already filled the witness forms to testify against Oyo-Ita.”

“We are on the trail of one of her aides, who coordinated some deals in the OHCSF. He was asked to flee abroad to cover up a few things. We will get him.”

AbdulRazaq to partner EFCC in recovery of looted funds