Why APC lost in Rivers, by Oshiomhole 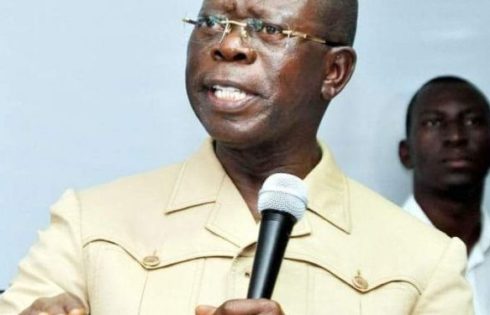 ALL Progressives Congress (APC) National Chairman Comrade Adams Oshiomhole has said the inability of the party to solve its internal wrangling and the refusal of the various interest groups in Rivers State to back down on their demands caused the party’s loss in the last general elections.

Speaking while inaugurating a caretaker committee for the state chapter of the party, Oshiomhole regretted that the various groups in the state held on to their demands, even when it was clear that it was costing the party dearly.

The national chairman advised members of the caretaker committee to earn the confidence of all interest groups to enable the party gain more grounds.

Factions of the party loyal to Transportation Minister Rotimi Amaechi and Senator Magnus Abe engaged in a fight to the finish ahead of this year’s election.

It led to the courts voiding the chances of the party to take part in the polls.

Oshiomhole said: “As we are all aware, for almost a year, the Supreme Court resolved the issue of the leadership of the APC in Rivers State and nullified the ward, local government and state congresses. This has left us with a complete void in the state in the sense that we do not have formal party structures, even though we know that we have overwhelming APC support base in Rivers State. But that is not a substitute to having a formal structure.

“So, as a consequence to the Supreme Court ruling, the National Working Committee (NWC) decided that this is indeed the time to restart the process of rebuilding the party in River State. But we cannot rebuild the party from outside; we need a state-based organ to assist those coming to carry out the congresses.

“Accordingly, the NWC decided to approve a caretaker committee that will be on ground to assist those who are coming to ensure that we have a hitch-free conduct of all the congresses.

“You have a very simple task but also very complicated one. You are assuming office as caretaker committee members at a time when we have huge internal fighting within the APC. Your first task must include trying to build bridges across the divide within the APC family in Rivers State.

“We will also look at the possibility of sending some high-level mediation to ensure that all the forces within the party in the state see the need to work together so that by the time we conduct the congresses, it will be seen as a peaceful, transparent family affair, in line with the tradition of the APC.

“As a progressive party, we cannot afford to build a house that is not based on popular participation. Politics is about people. The more you are on ground, the more transparent you handle your affairs and the more likely you are going to have people claiming ownership of the process by members and leaders of the party.”