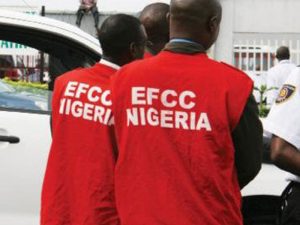 The duo are seeking redress and asking for N20 million damages from the commission.

The Ilorin Zonal office of the commission, on Wednesday, accused the lawyer of defrauding Pastor Adetunji Adedoyin of his property valued at N20 million. The commission also claimed that Aluko was on the run, following invitation and interrogation of other lawyers reportedly involved in the matter.

Adedoyin is also joined as respondent in the suit, which has been assigned to Justice Hammed Gegele, of the State High Court.

Aluko and his client prayed the court to restrain the EFCC from inviting, arresting or prosecuting them pending the determination of a motion on notice filed at the court.

The applicants urged the court to compel the EFCC to enforce an order on the agency and to tender unreserved public apologies through national dailies to them.

They also urged the court to institute N20 million damages against the commission for what they called illegal, unlawful and unconstitutional online publication against their reputation.

The applicants averred that the circulation of the online publication against them prior to invitation to react to the petition or arraigning them before any competent court is illegal, unconstitutional and against their fundamental rights.

Addressing reporters in Ilorin, Aluko expressed disappointment over the operation of the anti-graft agency.

The lawyer insisted that he was not on the run, as the EFCC allegedly claimed, adding that he was neither called nor invited for interrogation before the publication went viral on the social media.

He added: “I was highly surprised and disappointed over the EFCC operation. Many people have been calling me that I have been declared wanted over allegation of fraud on which some lawyers were arrested.

“I have never in my life been involved in fraud. The EFCC has never called me on phone or invited me personally or given me notice to come to their office in respect of the allegation by Adedoyin, who is a pastor.

“I read it online and heard from friends that I was at large. Honestly, this is defamation of character and I am not going to take it lightly.”

Aluko explained that the purchase of the landed property by his client followed due process, as there was a court judgment to back it up.