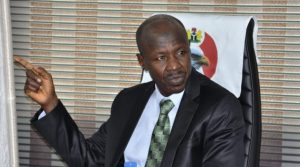 The Economic and Financial Crimes Commission has detained two senior officials of the Niger Delta Power Holding Company in connection with the ongoing investigation into alleged billions of dollars spent on power sector in the country.

It was gathered that the NDPHC Head of Finance, Mr Marvel Emefiele, and Head of Compensation, Mr Eze Odigbo, were being detained for alleged involvement in bogus payment and diversion of about N850m compensation to communities where the components of the power project were sited.

Emefiele was said to have okayed the payment of the N850m while Odigbo allegedly effected the compensation to the communities.

The two suspects were being questioned over the propriety of the payment.

Findings indicate that approval was granted for the payment of N84bn compensation to the communities where transmission lines of the power project were to be laid, but the EFCC detectives reportedly discovered suspicious payments to the beneficiaries.

The commission is also holding the Managing Director of Chris Ejik Nigeria Limited, Christian Imoka, for allegedly failing to execute the power contract despite receiving N500m.

Imoka’s firm was awarded the contract for Lot 14 Lekki Ajah Transmission Line, but it allegedly did not execute the contract.

Sources explained that the MD of Pivot Engineering, Mr Richard Ayibiowu, was also arrested and held in custody over opaque and fraudulent compensation payments to some communities.

A popular industrialist, Mr Oba Otudeko, is the Chairman of Pivot Engineering.

The PUNCH learnt that investigators found that part of Lot 8 of the power project, Iheala Olu Transmission Line, was not executed by Pivot Engineering despite claims it paid N360m to the communities in the area due to alleged hostility by the people.

Our correspondent learnt that the men were arrested after they failed to honour previous invitations from the commission.

Top EFCC officials confirmed the detention of the officials, but declined to provide further details.

The ongoing investigation into the National Independent Power Projects was expected to recover the money paid to 27 NDPHC contractors who failed to execute the contracts after receiving billions of dollars and naira.

The firms were believed to have received $8.5bn cash taken from the Excess Crude Account and made available to the NPDHC for the power project under the administration of former President Olusegun Obasanjo in 2006.

The money was reportedly paid to the contractors between 2006 and 2011 during the administrations of Obasanjo, the late Umaru Yar’Adua and Goodluck Jonathan.

It was gathered that the anti-graft agency had also grilled some Central Bank officials for failing to follow due process in the release of money to contractors.

Detectives had quizzed officials of the Rockson Engineering Limited, which was reportedly paid a whopping $2bn without due process.

The firm was said to have opened a letter of credit in its name instead of the name of the foreign original equipment manufacturer as was the standard practice.