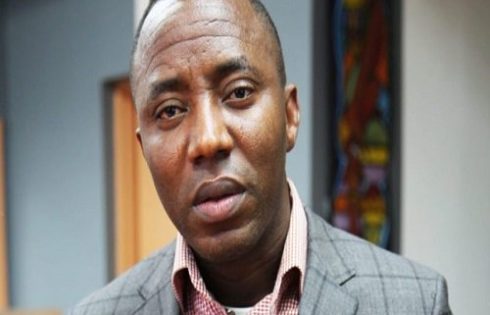 Justice Nkeonye Maha of the Federal High Court in Abuja, on Wednesday, refused to hear an application filed by the convener of #RevolutionNow protest, Mr Omoyele Sowore, who is being held by the Department of State Services, for allegedly plotting a coup against President Muhammadu Buhari.

Sowore, who has been in the DSS custody since August 2, 2019, has denied the allegations of attempting to topple the President Buhari government, insisting that he only mobilised Nigerians “to address the crises of corruption, maladministration, mismanagement of the economy and insecurity.”

Justice Taiwo Taiwo of the same Abuja division of the Federal High Court had, at the instance of the DSS, issued the detention order on August 8, permitting the security agency to hold the activist for 45 days to enable it to conclude investigations into the coup plot allegation.

Sowore, the SaharaReporters publisher and presidential candidate of the African Action Congress, in the last February poll, had through his lawyer, Mr Femi Falana (SAN), filed a motion challenging the detention order.

The DSS had also filed a counter-affidavit urging the court not to set aside the detention order as requested by Sowore.

On Wednesday, the case came up before Justice Maha, who took over from Justice Taiwo, in another turn of her sitting as a judge during the Federal High Court’s vacation scheduled to last till mid September.

But she rebuffed Falana’s plea to hear the case, preferring to send it back to Justice Taiwo who issued the order.

Justice Maha noted that by the Supreme Court authorities, she was not competent to review or overrule the proceedings and decision of Justice Taiwo, who made the order.

She added that by the apex court’s authorities, courts of the same level (coordinate) of jurisdiction,  had no power to review the decisions of one another.

She also said Justice Taiwo had after he granted the 45 days detention order, adjourned the matter till September 21 for hearing.

“This matter is hereby transferred back to Justice Taiwo, being a vacation court, to be heard by him,” Justice Maha ruled.

While earlier urging Justice Maha to hear the case despite not being the one who issued the detention order, Falana had argued that the court was constitutionally empowered to nullify an ex parte order that was granted in error by another judge.

Arguing that the detention order Justice Taiwo issued in favour of the DSS was ab initio a nullity, Falana argued that Order 26 Rule 9 of the Federal High Court Civil Procedure Rules,  2019, permitted anyone affected by such order to within seven days, approach the court to set it aside.

He said his client, within 24 hours after the order was issued against him, filed his motion to challenge the legality of the order.

In a court paper filed to back his motion seeking the reversal of the detention order on Tuesday, Sowore disputed the allegation by the DSS that he met with “foreign collaborators” in Dubai, the United Arab Emirates, and other countries, on how to topple the President Buhari government.

He also debunked the agency’s allegation that he received “millions of dollars” from the alleged collaborators at the meetings to sponsor widespread attacks on Nigeria with a view to toppling the Nigerian government.

He said contrary to the DSS’ claims, he had never visited Dubai or any of the UAE cities.

He said he had never received any money from any person or organisation for the purpose of toppling the government, adding that he had willingly provided his local and foreign banks’ account details for the DSS.

He also said he never planned a coup as claimed by the DSS, but only mobilised Nigerians “to address the crises of corruption, maladministration, mismanagement of the economy and insecurity.”

In a veiled reference to President Buhari, Sowore stated that he “is not a coup plotter like the military officers who toppled elected governments in Nigeria in January 1966 and December 1983 and who were never arrested and prosecuted by the Federal Government.”

I’ll consult with my client –Falana

Reacting to the Federal High Court ruling on Wednesday which refused to grant Sowore’s motion, Falana said that he would consult with his client on the next step to take.

Falana made the remark in an interview with newsmen shortly after Justice Maha refused to grant a motion filed to challenge Sowore’s detention.

The News Agency of Nigeria reported that Justice Taiwo Taiwo had, in a ruling on August 8 in an ex parte application, ordered Sowore’s detention for the said period of time to enable the DSS to carry out and conclude its investigation on allegations levelled against him.

Falana, who had asked the court to set aside the ex parte order granted by Justice Taiwo, also applied for oral bail when Justice Maha rejected the earlier application.

Justice Maha, however, referred the matter back to Justice Taiwo for further hearing, ruling that it was not in the act of the court to overrule the decision of court of cognate jurisdiction.

Responding, Falana said, “We are going to consult our client with respect to our next step. The court has just delivered its ruling and we are going to meet with our client today (Wednesday) in order to take a decision on the matter.

“In the interim, we are back to Hon Justice Taiwo as per the ruling of the court.”

On how he felt on the ruling, Falana said, “My feeling is irrelevant. I take instructions from clients and I am going to discuss the ruling with my client so that we can take appropriate decision.”

He said while the suit by the Islamic Movement in Nigeria was adjourned till September 11, the counsel for the Attorney-General of the Federation, Mr Ayo Apata, filed a fresh motion and he needed more time to send his reply.