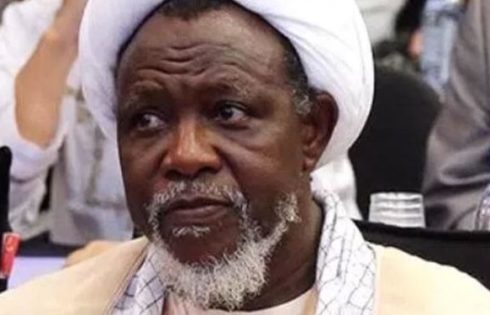 The Federal Government has alleged that the leader of the Islamic Movement of Nigeria, Sheik Ibrahim El-Zakzaky, has the sole aim of turning Nigeria into an Islamic state.

The government also said the cleric had the full support of Iran to achieve this aim.

The government made these claims in a counter-affidavit it filed against the IMN’s motion challenging the Federal High Court’s order of July 26, 2019 proscribing the group.

The counter-affidavit was deposed to by Enyinnaya Adiogu, a Deputy Commissioner of Police in charge of operation in the Federal Capital Territory Command.

It stated that El-Zakzaky was influenced by the Iranian revolution, which led to the emergence of Ayatollah Khomeini as the Asian country’s leader in 1979 after Shah was overthrown in a popular uprising.

According to the government’s counter-affidavit, the IMN members first pledge their allegiance to Khomeini at their gatherings, and then to their local leader, El-Zakzaky.

It added, “The IMN views itself as a government and Sheikh El-Zakzaky as the only legitimate source of authority in Nigeria and it does not recognise the authority of the Nigerian government and views its leaders both Muslims and Christians as corrupt and ungodly.

“That the Islamic Movement in Nigeria began with a Shia Muslim university activist, Ibrahim El- Zakzaky, who become so impressed with the 1979 Iranian Revolution that he wanted one at home (Nigeria).

“That after he returned home, Ibraheem El-Zakzaky formed the Islamic Movement of Nigeria and turned it into a vehicle for proselytising and gaining followers in the 1990s.

“That till date Sheikh El-Zakzaky enjoys the support of Iran in all the activities of the Islamic Movement in Nigeria, including an agenda to make Nigeria an Islamic state.

“That as a result of El-Zakzaky movement’s activities, many Muslim youths have converted to Shia Islam of the Islamic Movement of Nigeria.

“That the main aim of the Islamic Movement of Nigeria is to propagate the ideology in Iran and turn the country (Nigeria) into an Islamic state as was done in the Iranian Revolution of 1979.

The counter-affidavit was filed to oppose the motion filed on August 2, 2019 by the IMN to challenge the order of proscription issued against it by the Federal High Court.

The IMN filed the motion on notice before Justice Nkeonye Maha of the Federal High Court in Abuja, who issued the proscription order and designated it a terrorist group in a ruling delivered on July 26.

The application filed on behalf of the group by Mr Femi Falana (SAN), alleged that the order was made without jurisdiction.

It contended that the court lacked the jurisdiction to issue the ex parte order against a non-juristic body like the IMN which was not an incorporated entity.

It also alleged that the order breached the fundamental right of all its members to fair hearing, guaranteed by section 36 of the Nigerian constitution.

It also alleged that the ex parte order violated its members’ right to freedom of thought, conscience and religion as well as freedom of assembly and association as guaranteed by various sections of the constitution.

Meanwhile, Justice Maha on Wednesday fixed September 11 for hearing of the IMN’s motion.

The judge adjourned the matter after granting leave to the Federal Government to be allowed to regularise processes it filed to oppose the IMN’s motion.

The Federal Government was represented by the Solicitor-General of the Federation and Permanent Secretary, Federal Ministry of Justice, Mr  Dayo Apata.

IMN’s lawyer, Falana, did not oppose the Federal Government’s request and pleaded with the court to fix the case for hearing, which the judge did by adjourning till September 11.