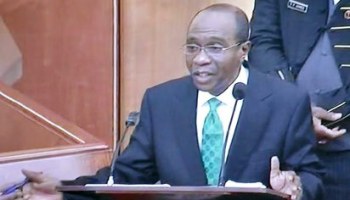 The Central Bank of Nigeria (CBN) on Monday it will strive to protect the country’s currency reserves after a British court ruling granted a small natural gas firm the right to seize $9 billion in assets from the Federal Government.

The huge cash would be one of the largest financial liabilities imposed on Nigeria in its history, representing 20 per cent of the currency reserves of Africa’s largest economy and top oil producer.

CBN Governor, Godwin Emefiele said the country had sufficient grounds to appeal the ruling, over an aborted gas project siated for Calabar, the Cross River State capital. The court ruled on Friday in favor of Process and Industrial Developments (PID) Ltd.

“We know that the implication of that judgment has some impact on monetary policy, and that is why the central bank is going to step forward and … defend the reserves,” Emefiele told reporters in Abuja.

Pressure has been building on the naira as oil prices drop and foreign investors lock in their profits on local bonds as yields have fallen from as high as 18 per cent a year ago. As yields have fallen, foreign inflows have slowed, in turn leading to a shortage of dollars and hurting the naira.

In a further sign of pressure on the currency, President Muhammadu Buhari last week told the central bank to stop providing funding for food imports, his spokesman said.

However, Emefiele did not say what other measures the central bank might take to defend the country’s currency or its foreign exchange reserves.

The naira has been quoted at 364 per dollar for foreign investors since last week from 363.50, as liquidity dried up on the forex market.

Nigeria operates a multiple exchange rate regime that it has used to manage pressure on the currency.

Emefiele sought to reassure investors who were focused on the oil price and the bank’s policy on debt sales, saying that the currency would continue to be stable.

“Worryingly, the central bank is employing unconventional tools more regularly to try and keep the naira stable and safeguard reserves, and risk exists … which could ultimately come at the cost of slower growth and higher inflation,” De Hart said.