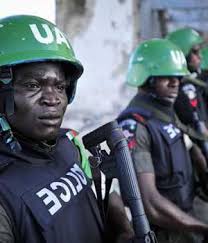 Policemen, who participated in peacekeeping mission in Guinea Bissau, have written to the upper chamber of the National Assembly, asking it to intervene in the payment of 23 and half months’ allowance allegedly owed them by the Economic Community of West African States.

The officials equally requested the Senate’s intervention to ensure that their luggage in Guinea Bissau were transported back to Nigeria.

PUNCH Metro had reported that policemen in two sets were deployed in Guinea Bissau for the ECOWAS peacekeeping scheme.

While Contingent III arrived in Guinea Bissau in July 2013 and left in July 2014, Contingent IV took over the same month and returned to Nigeria in December 2015.

It was also reported that policemen in Contingent III were paid six months’ allowance, while those in Contingent IV had not received any amount for their 18 months’ service.

One of the participants told our correspondent that after the PUNCH Metro’s report, the organisation paid the Contingent III one month’s allowance, while Contingent IV got one and half months’ pay.

He said the Inspector-General of Police, Ibrahim Idris, met with some top ECOWAS officials sometime in February 2017 and they promised to pay the remaining arrears soon.

He said, “We learnt the cheque for the payment is ready, but it is being withheld by a senior official of ECOWAS for reasons known to him. Whereas, soldiers with whom we participated together in the peacekeeping operation under ECOWAS had been fully paid.”

The Director of Peacekeeping, ACP Sadiq Abubakar, confirmed the meeting between the commission and the IG, adding that he was surprised that half of the arrears had not been paid.

Abubakar, who spoke with our correspondent on the telephone, said, “The Vice-President of ECOWAS and the Commissioner for Peace, Security and Political Affairs met with the Inspector-General of Police and they promised to pay half of the money.

Another policeman, who did not want to be identified, said they decided to report the organisation to the Senate through a senator representing Ife/Ijesha Senatorial District, Osun State, Babajide Omoworare, because the IG’s meeting did not yield positive result.

“We are also asking the Senate to intervene so that our luggage can be brought back to the country,” he added.

An aide to the senator, Ekundayo Fadugba, confirmed that Omoworare had been notified, adding that he would present the matters before the Senate next week.

The Director of Communication, ECOWAS, Liberor Doscof, in a statement, said the commission was trying its best to resolve the issue.

“But it is pertinent to know that this issue of non-payment is not affecting Nigeria alone, but also other countries within the region. ECOWAS is working with all the member states concerned to resolve this pending issue.

“Due to the sensitive nature of the situation, the decisions taken by ECOWAS and the member states involved to resolve this problem cannot be disclosed or published.

“This is because there are protocols between ECOWAS and its member states that must be respected and that is why you are advised to forward your queries to the Nigerian Inspector-General of Police,” the statement read in part.

But the Force Public Relations Officer, CSP Moshood Jimoh, said the police had no blame in the issues, adding that the allowance had not been paid as promised by ECOWAS.

“Transportation of the luggage is equally the responsibility of ECOWAS that took them on the mission. We have given them assurance (that the luggage would be brought back to the country) based on the assurance given to us by ECOWAS,” he added.