Sanusi Lands in Lagos as Abuja Court Frees Him from Detention 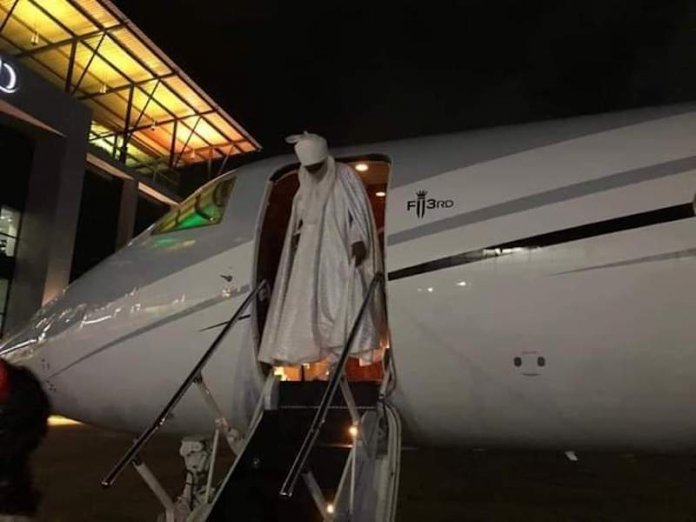 The dethroned Emir of Kano, Muhammadu Sanusi ll, yesterday afternoon regained his freedom, following the verdict of a Federal High Court in Abuja that ordered his immediate release, and left Awe, Nasarawa State, where he was confined, to Abuja, and then finally to Lagos.

The Governor of Kaduna State, Nasir El-Rufai, who had earlier visited Sanusi in Awe, on his third day in detention, and took him to Abuja, was also at the Abuja airport to see him off to Lagos.

Sanusi prayed for his supporters at the Abuja airport before boarding the aircraft to Lagos and arrived Lagos close to midnight. He was ushered out of the Lagos airport by his friends/supporters and driven to Ikoyi.

The former Emir of Kano, after his dethronement by the Kano State government on Monday, had indicated interest to move to Lagos, but was prevented from doing so by security agents.

However, his family was moved to Lagos in a private jet provided by one of his friends. He finally reunited with them last night.
Earlier yesterday, El-Rufai on his Twitter handle confirmed that they were heading to Abuja from Awe. He also uploaded a picture showing the former Emir and himself in a vehicle.

Sanusi was moved to Awe on Tuesday by security agents, and was in confinement, but receiving state visitors and family members.
But yesterday, he stepped out for the first time to lead prayers at the Awe Central Mosque, located within the palace of the Emir of Awe.

Last Thursday, a Senior Advocate of Nigeria, Lateef Fagbemi had filed an exparte motion for the release of Sanusi from confinement in Awe.
Justice Anwuli Chikere of the Abuja Division of the Federal High Court yesterday granted the prayer and ordered the release of the former Emir of Kano from unlawful detention.

Sanusi in the fundamental human rights suit instituted in Abuja on March 12, prayed the court to void his banishment to Nasarawa State and order his release so that he could enjoy his fundamental rights as provided by law.

The former emir urged the court to restore his right to human dignity, personal liberty, freedom of association and movement in Nigeria apart from Kano State.

The suit was brought pursuant to section 34, 35, 40, 41 and 46 of the 1999 Constitution and Order 4 Rule 4 of the Federal High Court.
Apart from the originating motion, Sanusi also filed an exparte application, praying the court for an interim order for his release.

He also prayed for another order granting him leave to serve the enrol order of his release and the originating motion on any officer at the office of the respondents.

The respondents are the Inspector General of Police, Director General of the State Security Service (SSS), Attorney General of Kano State and Attorney General of the Federation.
Delivering ruling yesterday, Justice Chikere made an, Interim order releasing Sanusi from detention and or confinement of the respondents and restoring the applicant’s right to human dignity personal liberty, freedom of association and movement in Nigeria (apart from Kano State) pending the hearing and determination of the applicant’s originating motion.

The government of Kano State had on Monday, March 9, 2020, announced his dethronement on grounds of alleged disregard to constituted authorities, disloyalty, refusal to attend council meetings amongst others.
Shortly after his dethronement, he was banished to Loco town in Nasarawa State from where he was later moved to Awe town where he was confined prior to his release yesterday.