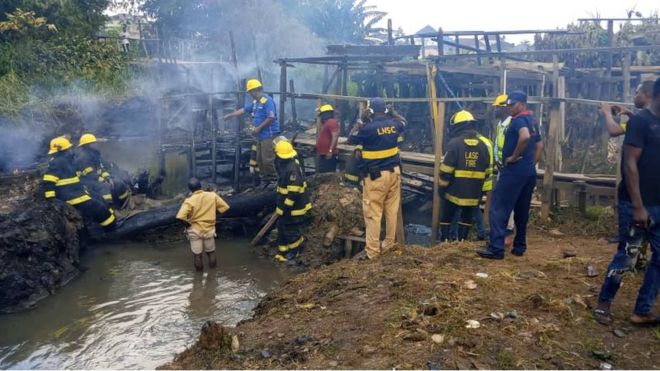 Seven persons, including a prophet attached to one of the white garment churches and his parishioner, were some of the casualties of the explosions that yesterday engulfed some pipelines belonging to the Nigerian National Petroleum Corporation (NNPC) at Igando area of Lagos State.

The cleric and the parishioner were said to have visited the canal nearby to conduct some spiritual exercise when the explosions occurred and burnt them beyond recognition.

It was gathered that the candles they lit for the spiritual exercise had ignited the fuel seeping through the pipeline that was earlier vandalised by thieves.

The explosions were further exacerbated by the spilling fuel, which had soaked the ground at the back of the affected estates- Diamond, Lanre and Glory Land.

THISDAY also gathered that five of the vandals, who were left behind to secure the stolen products, were also burnt in the explosions, while the police arrested one.

Firefighters from the Lagos State Fire Service and other emergency responders battled the inferno, and about 10.05 a.m. they rescued of one of the residents before subsequent rescuers came.

The survivors, many of who were badly burnt, were given first aid before being transferred to the Lagos State Ambulance Services (LASAMBUS) for onward treatment at the hospital.

Confirming the explosions, the Director General of the Lagos State Emergency Management Agency (LASEMA), Dr. Femi Oke-Osanyintolu, said: “There was an outbreak of fire at the back of Diamond Estate along Isheri/LASU -Igando Road. I suspect that the fire must have been caused by pipeline vandals. We activated the Lagos State Response Plan and all key stakeholders were mobilised.

“This resulted in a fire outbreak at four points. A man who sustained 70-degree burns was rescued and taken to the General Hospital in Alimosho while an adult male was burnt to death; his body was bagged and taken to the mortuary.”

Oke-Osanyintolu added that the actual loss would be determined upon a post-disaster enumeration after the fire has been put out and normalcy restored.
He also stated that LASEMA response team and other responders would take measures to minimise the risk of further explosion.

At the scene of the incident, it was evident that the vandals had held sway for a long time before the explosion happened.

Meanwhile, residents who lamented that this is the third explosion, also admitted that vandalism had become synonymous with the environment as the vandals had unfettered access to the area.

One of the residents, Mrs. Chinonyelum Akonye, told Newsmen that their initial reaction when they heard the explosions was to flee as they could not tell the extent of the damage this time around.

According to her, “When the explosion happened, I did not care to pick anything from the house. The first thing that came to my mind was to flee to safety. However, many people sustained injuries.

“The government needs to do something about this issue. We are tired of recurring fire outbreaks and the dangers we are subjected to as a result of activities of vandals.”

All the residents interviewed, however, indicted security agencies for not living up to their responsibilities. Some of them alleged that they have anonymously reported the vandalism to security agents who did nothing to stop it.

Youth Leader of Iyando Odo Community, Mr. Atobatele Isreal, lamented that the security operatives mounted at the pipelines to curb vandalism have not been active enough on their job as they should, thus paving the way for vandals to have a field day.

He also alleged that the authorities turned a blind eye despite the fact that “unlike the explosion before this one, the pipeline leaked for two to three days. The security personnel in charge of the pipeline are not doing their job. The explosion started around 7:30 a.m.

“This passage had been locked to stop people from taking the wood bridge. Those who came this morning to bathe were driven away, if not, the casualty figure would have been higher.”

On arrival at the scene, the Lagos State Deputy Commissioner of Police, Operations, DCP Ali Mohammed, while sympathising with residents, said security personnel had warned them against vandalism.

He said: “We can now see the act of the vandals. Before the incident, they were warned by the Nigerian National Petroleum Corporation (NNPC) officials, the policemen and other security personnel not move close to that area. When someone is destined to die, the person will not heed to warnings.

“They were warned when the fire started but unfortunately, they still found their way there. Before this time, policemen have been here and when they came, they met some people here lighting candles.”

Another Batch of 168 Nigerians Return from Libya