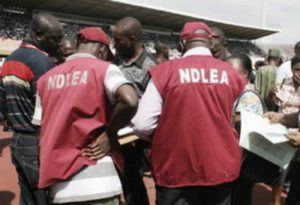 Ahmadu stated that on June 10, the command arrested one Kouassi JeanPaul, otherwise known as Eze Ikechukwu, who swallowed 80 wraps of methamphetamine.

According to him, the 55-year-old suspect was arrested on his way to Jakarta, Indonesia.

He said the suspect would be arraigned on Friday (today).

He explained that the suspect found it difficult to excrete the wraps that he swallowed after being caught.

He said, “He swallowed 80 wraps of Methamphetamine. He freely excreted 79 wraps with one wrap trapped in his system. The suspect was referred to the Lagos State University Teaching Hospital from the Nigeria Air Force clinic.”

Ahmadu said after a surgery at LASUTH on June 27, 2019 JeanPaul excreted the remaining one wrap in his system.

While warning Nigerians against drug trafficking, the commander said no fewer than four people lost their lives to the crime recently.