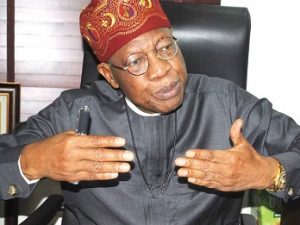 The Federal Government on Tuesday expressed confidence that the decision of a United Kingdom court which recently asked an Irish firm, Process and Industrial Developments Limited, to seize $9.6bn in Nigerian assets would be upturned.

It insisted that the judgment which it described as dubious would not stand the tests of morality and law.

The Minister of Information and Culture, Alhaji Lai Mohammed, said this during his visit to the corporate headquarters of Leadership newspapers in Abuja.

The minister said that apart from the confidence the government had that the judgment would be upturned, it would go ahead with the probe ordered on the matter.

This, he said, was necessary because of government’s strong belief that there were underhand dealings in signing the controversial contract.

Mohammed said, “How can people come to Nigeria with portfolio, and walk away with about 20 per cent of our entire foreign reserve?

“We believe that, both in terms of morality and law, we are confident that we will upturn the judgment.

“It is important to know that the government has also ordered investigation into the transactions because there are strong indications that underhand things went on.”

The minister again assured Nigerians that the country would not lose any of its assets based on the judgment despite what it described as the firm’s grandstanding.

He disclosed that the issue would be addressed both legally and diplomatically.

He added, “You will see that there is a lot of grandstanding on the part of the P&ID, especially by the public relations consultant it hired.

“As a matter of fact, they are threatening that they are already compiling the list of assets of Nigeria to attach.

“The truth of the matter is that, even in the judgment, the court said that it could not start any attachment until the court resumes from vacation.

“We are doing everything possible and we are very optimistic that we will escape any embarrassment of attachment of the country’s assets as a result of this dubious award.

“The Federal Government has taken all necessary steps to ensure that no property of the country is attached by any court.

“Government will leave no stone unturned, legally and diplomatically, to ensure that our asset will not be affected as a result of the judgment.”

The firm had earlier told The PUNCH exclusively that it had started listing Nigerian assets for seizure.

In another exclusive report published by The PUNCH, the firm had called on the Federal Government to stop what it called “sham probe” into the contract and appoint a negotiator if it was truly interested in negotiation over the award.